Obama Tears Up During A Presidential Farewell At The DNC 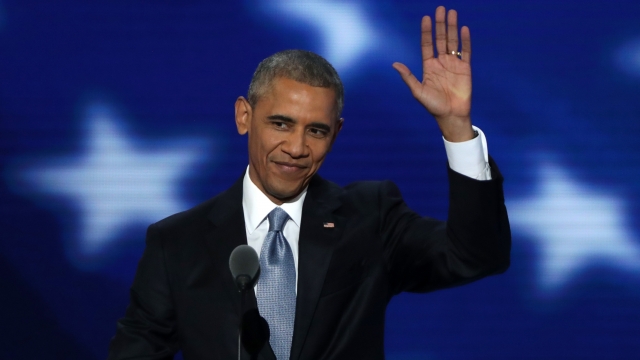 SMS
Obama Tears Up During A Presidential Farewell At The DNC
By Zach Toombs
By Zach Toombs
July 27, 2016
President Obama's speech was both a spirited endorsement of Hillary Clinton and an optimistic farewell.
SHOW TRANSCRIPT

"Time and again, you've picked me up," an emotional President Obama told the Democratic National Convention on Wednesday. "And I hope sometimes I picked you up too. And tonight, I ask you to do for Hillary Clinton what you did for me. I ask you to carry her the same way you carried me."

The president's DNC speech was a moment of unity for Democrats. But it was also a presidential farewell.

"The audacity of hope. America, you've vindicated that hope these past eight years," Obama said. "And now I'm ready to pass the baton and do my part as a private citizen. So this year, in this election, I'm asking you to join me to reject cynicism and reject fear and to summon what is best in us to elect Hillary Clinton as the next president of the United States and show the world we still believe in the promise of this great nation."