Obama Taps Eric Fanning As Next Secretary Of The Army 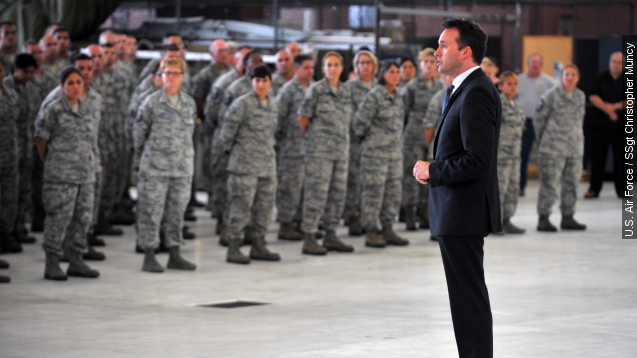 President Obama has nominated Eric Fanning, a former adviser to current Defense Secretary Ashton Carter, as the next Secretary of the Army.

If confirmed by the Senate, Fanning would become the first openly gay secretary of a military branch. His appointment is in line with the Obama administration's push to make the military more inclusive towards LGBT service members.

As Army Secretary, Fanning will be tasked with rebuilding the force after two long, drawn-out wars. The Army's shrinking troop counts, tight budgets and aging weapons systems are all issues Fanning will have to grapple with. (Video via C-SPAN)

His nomination has been met with approval from both Pentagon insiders and advocacy groups. A former DoD official told The New York Times, "I can’t think of any civilian with more experience with the services. He understands all of their unique cultures and processes."

The Human Rights Campaign called Fanning's nomination "a sign of hope and a demonstration of continued progress towards fairness and equality."

If confirmed, Fanning will replace current secretary John McHugh, who is planning to step down Nov. 1 after six years.

This video includes images from the U.S. Air Force.