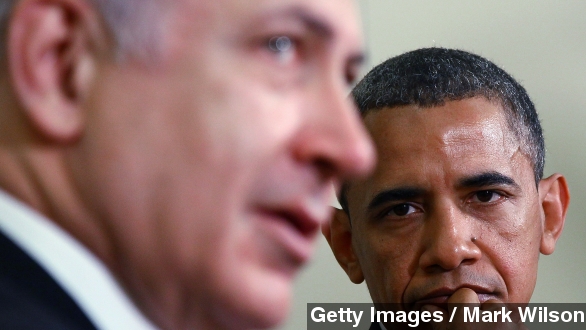 It appears Israeli Prime Minister Benjamin Netanyahu's campaign rhetoric has only served to deepen the divide between himself and President Obama.

"We take him at his word that it wouldn't happen during his prime ministership, and so that's why we've got to evaluate what other options are available," President Obama told The Huffington Post.

That was the president reacting to Netanyahu's announcement — made a day before the election — that he would oppose Palestinian statehood, a reversal from his earlier support for a two-state solution. (Video via NRG)

Since his election win, he's tried to distance himself from that claim.

Netanyahu told NBC, "I want a sustainable, peaceful two-state solution, but for that, circumstances have to change."

The White House has also condemned Netanyahu's election day warning — that Arab voters were being bused to polls in droves — as cynical.

The split between the Obama administration and the prime minister has increasingly become a domestic political issue in the U.S. as well, with conservatives criticizing the president's handling of the relationship. (Video via Fox News)

Some conservative politicians have taken matters into their own hands, like when House Speaker John Boehner arranged for Netanyahu's polarizing speech before Congress. (Video via PBS)

In that speech, Netanyahu criticized the current nuclear negotiations with Iran, an issue that's driven the conflict with the Obama administration, which supports the negotiations. (Video via RT)

Netanyahu's pre-election rhetoric in general got pretty extreme. In one campaign video, his party even associated its left-wing opposition with ISIS. (Video via Likud)

So it's not entirely surprising Netanyahu's tried to walk some of that rhetoric back. What is more surprising is, with his recent comments, it seems President Obama doesn't want to let him.