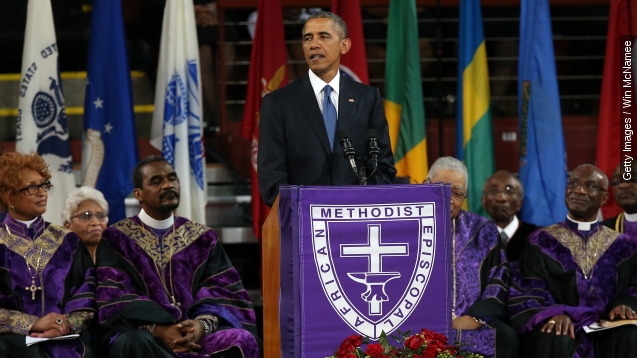 On Friday, President Obama delivered his eulogy for Rev. Clementa Pinckney, one of the nine churchgoers slain in a racially motivated attack in Charleston, South Carolina earlier this month.

Pinckney served as a state senator for South Carolina since 2001. He was also pastor at the Emanuel African Methodist Episcopal Church. Six thousand people attended the memorial service in Charleston.

Similar to calls Obama made at the memorial service for the victims of the school shooting in Newtown, Conn. in 2012, he used his speech to bring up the nation's gun control restrictions.

"None of us should believe that a handful of gun safety measures will prevent every tragedy, it will not. ... But it would be a betrayal of everything Reverend Pickney stood for if we allowed ourselves to slip into a comfortable silence again," Obama said.

Unlike other instances when the president has delivered remarks following high-profile acts of violence, this time, Obama knew one of the victims.

Obama met Rev. Pinckney in 2008 when he was still early in his first presidential campaign and Vice President Joe Biden met Pinckney less than year ago at a breakfast at the South Carolina state capitol.

Twenty-one-year-old Dylan Roof is accused of carrying out the shooting. He is facing nine murder charges and is being held on a $1 million bond.