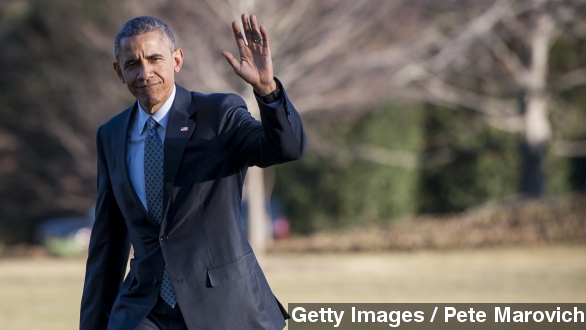 President Obama raised some eyebrows Wednesday when he appeared to endorse policies making it mandatory for Americans to vote.

During a talk in Cleveland, Obama was asked about campaign spending and the Supreme Court's "Citizens United" decision, which allowed political organizations to spend unlimited amounts of money in elections. His answer included this comment:

"In Australia and some other countries, there's mandatory voting. It would be transformative if everybody voted. That would counteract money more than anything. If everybody voted, then it would completely change the political map in this country."

The president didn't actually issue a call for a new policy, but in mentioning Australia, he spoke approvingly of one of the 11 countries where citizens can be fined for not voting.

He's hardly the first academic to muse about how things would be different in the U.S. if everyone was forced to vote. A 2010 paper from the Brookings Institute discussed ways to make voting compulsory, and the paper's author argued his case to national media.

"With a voluntary voting system, only the people who are most strongly motivated to vote ... show up. And the people in the middle tend to show up less," William Galston told NPR.

The supposed benefits of mandatory voting include increasing voter turnout — obviously — and also putting centrists and independents on more equal footing with ideologues.

But as the conservative-leaning Washington Times points out, Obama has a more selfish reason to toy with the idea, saying the president's party "was trounced in last year's midterm election due to poor turnout among Democrats. ... The president repeated his frequent complaint that Democrats tend to stay home in midterm elections."

Obama continued to say such a policy would be a short-term solution, and said he would prefer the process of a constitutional amendment to clarify the role of money in politics. U.S. voter turnout was around 36 percent in the 2014 midterms.