Obama's 'You Can Keep It' Promise Wins 'Lie Of The Year' 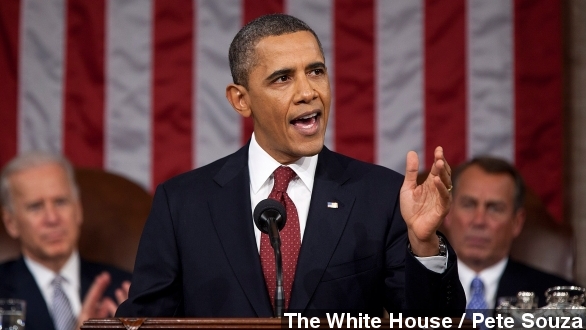 SMS
Obama's 'You Can Keep It' Promise Wins 'Lie Of The Year'
By Briana Koeneman
By Briana Koeneman
December 13, 2013
President Obama's statement, "If you like your health care plan, you can keep it," won PolitiFact's "Lie of the Year" award for 2013.
SHOW TRANSCRIPT

President Barack Obama has received yet another title — but this one isn't exactly something to brag about.

The fact checkers at the Tampa Bay Times' PolitiFact have given Obama their annual "Lie of the Year" award for this statement:

"If you like your health care plan, you will keep your plan." (Via C-SPAN)

The president said this over and over again while trying to sell Americans on the idea of the Affordable Care Act before its launch, and it was comforting for Americans who worried about the government making unwanted changes to their existing health care plans.

But once the act was officially in place, "If you like your health care plan, you can keep it," was a promise that could not, in fact, be kept. (Via Healthcare.gov)

And President Obama was forced to apologize.

"I am sorry that they are finding themselves in this situation based on assurances they got from me." (Via CNN)

And according to PolitiFact, that in itself was enough to warrant the title with a rating of "Pants on Fire."

PolitiFact says: "Boiling down the complicated health care law to a soundbite proved treacherous. ... Obama and his team made matters worse, suggesting they had been misunderstood all along. The stunning political uproar led to this: a rare presidential apology. For all of these reasons, PolitiFact has named 'If you like your health care plan, you can keep it,' the Lie of the Year for 2013."

Readers in a separate online poll stood behind the nomination. Fifty-nine percent agreed with PolitiFact's decision on the rating.

Obama now joins the likes of Mitt Romney, who won last year's "Lie of the Year" award for a campaign claim that Obama himself was responsible for Jeep moving its U.S. production to China.