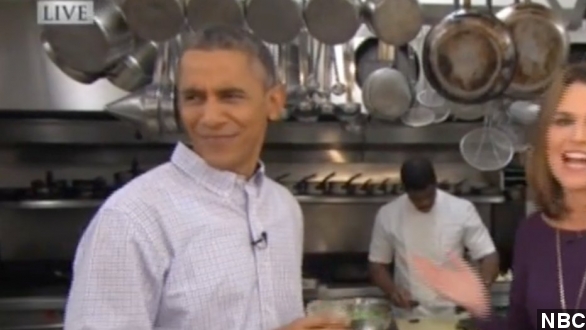 President Obama is pretty traditional when it comes to Super Bowl parties. He's got his food, beer and a nice big house to watch the game in, too. (Video via The White House)

But unlike most of us, he's got interviews to do beforehand. Bill O'Reilly grilled the president last year on Fox News. This year, those exclusive rights were given to Today Show host Savannah Guthrie and NBC.

NBC went to a pre-interview with Guthrie and Obama from the White House kitchen before the game. While it started kind of light — Obama talking about White House beer, how he thinks the game will go — Guthrie transitioned to much, much harder news, like the president's State of the Union address.

"You were confident. Your critics say a little cocky. ... The economy is doing better, but you laid out a bunch of proposals that you know cannot get through this Congress that is run by Republicans. ...  You're offering tax hikes for the wealthy, that's something they couldn't even get through the Congress when it was run by the Democrats."

Yeah. Things got surprisingly hostile and those on Twitter took notice, noting Guthrie's pressing of Obama.

Then there was this reaction from the president to a question on whether he prefers Joe Biden or Hillary Clinton. Not surprisingly, Obama didn't pick a side.

And a Yahoo! writer suggested the interview was weak and felt somewhat staged. He said, "It was pretty soon after Guthrie suggested that 'tax hikes for the wealthy' are 'counterproductive' that you could almost see Obama flick the off-switch on his press-interrogation mode."

The full interview between Guthrie and Obama can be seen on Monday's NBC Today Show.