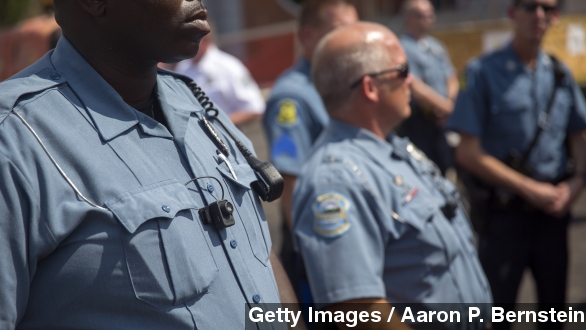 SMS
Obama's Police Reforms Face Obstacles In Congress
By Matt Picht
By Matt Picht
December 1, 2014
President Obama unveiled new reforms on police militarization following the unrest in Ferguson, Missouri, but can he get Congress on board?
SHOW TRANSCRIPT

In the wake of the civil unrest in Ferguson, Missouri, President Obama has announced new measures aimed at reforming local police departments across the country.

President Obama told reporters, "This is not a problem simply of Ferguson, Missouri. This is a problem that is national." (Video via CNN)

But the President can't just throw $263 million around on his own — The White House's proposal will have to go through Congress first.

The Hill reports Obama's request will likely go to the House Appropriations committee, which is currently working on a spending package for 2015. The new proposal simply expands the president's current budget request, which the committee has to approve.

The White House also doesn't have the authority to directly alter the controversial military equipment program: Section 1033 of the National Defense Authorization Act, which allows military vehicles and equipment to go to local police forces.

That power also rests with Congress — and some of its members have taken a very critical view of the program post-Ferguson.

Senator Rand Paul said, "The militarization of police is something that's gotten so far out of control."

And Senator Claire McCaskill said, "Giving military-grade vehicles and weapons to every police officer and police force in America comes with costs."

But despite the stern words, Congress seems unlikely to actually change the law. A bipartisan bill from Rep. Hank Johnson to revise Section 1033 recently stalled in the House, and the incoming wave of GOP committee leaders haven't mentioned moving on the issue anytime soon.

Police militarization does have its supporters in Congress, who point to incidents like the manhunt for the Boston Marathon bombing suspects as examples of law enforcement effectively utilizing military equipment.

And with cooperation between the White House and Congress increasingly rare, it's an open question whether Congress can pass ANY spending legislation before its Dec. 12 deadline, body cameras or not.