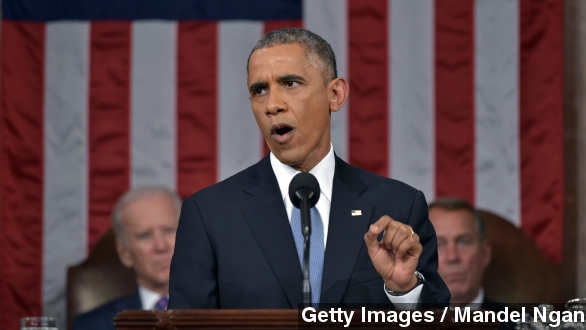 SMS
Obama's Mention Of Transgender Community: A First
By Cliff Judy
By Cliff Judy
January 21, 2015
President Obama supported the transgender community during his State of the Union speech Tuesday night, an impossible political move a few years ago.
SHOW TRANSCRIPT

Whatever you thought of President Obama's seventh and next-to-last State of the Union address's place in history, there's probably an opinion out there to match your own.

It's been labeled everything from a "hail mary" to missed opportunities in foreign policy. Heck, you even had to click the link "A rock star sealing his legacy" to get to this BBC analysis.

For the most part, the history will be made by what comes out of the president's speech in the coming months and not the speech itself. Except for at least one thing.

"Condemn the persecution of women, or religious minorities, or people who are lesbian, gay, bisexual or transgender," President Obama said. "We do these things not only because they're right, but because they make us safer."

That was the first-ever mention of "transgender," "lesbian" and "bisexual" in a State of the Union address, and, of course, it sparked innumerable reactions on social media.

GLAAD quickly posted an article praising the speech, writing it "makes this speech one that sets an agenda to create even more LGBT history and further LGBT equality."

That the president would make the first ever mention of "transgender" in a State of the Union and get a standing ovation for the comments on human dignity would've been thought politically impossible when Obama entered The White House, or even a few years ago.

But like most previously taboo political topics that make their way into a policy speech, the transgender community has seen its profile rise at an incredible pace in recent years.

From Laverne Cox becoming the first openly transgender actress to receive an Emmy nomination last year for her role in Netflix's "Orange Is the New Black" to Amazon's "Transparent" winning the Golden Globe for best comedy series, the transgender community is in a much harder-to-ignore position than ever before.

Time has even speculated the group's equality and mainstream acceptance has reached a tipping point.

But Obama's support of the transgender community was the main takeaway.

As Slate put it: "With his respectful, equality-minded embrace of the trans community on Tuesday, Obama likely gave this once-maligned group a significant boost in visibility. 2014 was an amazing year for trans rights. 2015 may be even better."