Obama's Long-Shot Budget Proposal Has A Carrot Or Two 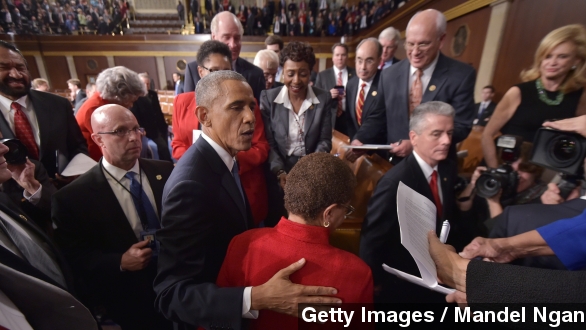 SMS
Obama's Long-Shot Budget Proposal Has A Carrot Or Two
By Cliff Judy
By Cliff Judy
February 2, 2015
For the first time, President Obama is proposing a budget to a fully Republican-controlled Congress, and he included increased defense spending.
SHOW TRANSCRIPT

Get ready. President Obama is about to put all those lofty ideas annually floated during the State of the Union address in front of Congress. (Video via The White House)

The president's budget proposal set to be introduced late Monday morning will be the first spending plan he's had to put in front of a fully Republican-controlled Congress, and that in and of itself already means skeptics abound over whether the two sides can agree to anything meaningful.

To be specific, Obama's budget calls for $3.99 trillion in spending and $3.53 trillion in revenue. That means a deficit of about $474 billion for this budget.

The president's weekly address posted Saturday was entirely about the budget.

"And it undoes the arbitrary, across-the-board budget cuts known as 'the sequester' for our domestic priorities and matches those investments dollar-for-dollar in resources our troops need to get the job done," Obama said.

And there you have the White House strategy. Get rid of spending caps the Tea Party's managed to insert the last few years by offering a carrot with high-profile Republican priorities like defense spending.

Obama's budget calls for $534.3 billion in base defense spending. It's a roughly 8 percent increase over the current fiscal year budget for the Pentagon. (Video via U.S. Army)

But Obama also wants to set a minimum tax rate on corporate profits kept overseas, end what he calls a "trust fund loophole" in the estate tax and raise the tax rate on capital gains.

Much of that has already been termed "dead on arrival" by GOP lawmakers. Rep. Paul Ryan was a bit more modest with his words, but the basic message was the same.

"What I think the president is trying to do here again is to exploit envy economics," Ryan said on NBC's "Meet The Press." "This top-down redistribution doesn't work. We've been doing it for six years. Look, it may make for good politics, but it doesn't make for good economic growth."

But for all the early posturing, The Wall Street Journal notes, "Many Republicans' desire to increase spending for the military and infrastructure keeps alive the possibility of a modest deal later this year."

And both sides will want to make a deal. While Obama has championed an improving economy on his watch, Republicans are quick to point out the nation's debt has risen to the highest percentage of the GDP since World War II. (Video via The White House)

And a government shutdown is something few, if any, analysts think either side would be willing to go through again.