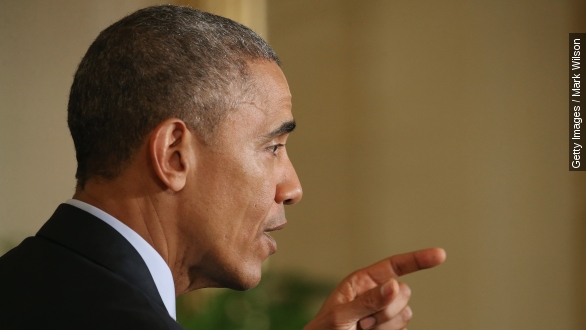 President Obama is marking Earth Day by taking a trip down to the Florida Everglades. (Video via U.S. Fish and Wildlife Service)

And he's doing it to talk about something that poses a real threat to one of the country's most fragile ecosystems — something the state's governor isn't keen on talking about. (Video via The White House)

"On Earth Day, I'm going to visit the Florida Everglades to talk about the way climate change threatens our economy," the president said.

The Everglades are a coastal freshwater wetland, which rest at a very low elevation and therefore have a high risk of being contaminated by the salt water of rising sea levels.

It's not a new issue for the Obama administration. In 2012, the White House pledged $80 million to support farmers who aid in Everglades conservation and proposed an additional $240 million this past February for further restoration. (Video via The White House)

But despite that, Florida's Republican Gov. Rick Scott tweeted Tuesday, "@BarackObama needs to live up to Everglades commitment," and "It's time for the federal government to focus on real solutions and live up to their promises."

Specifically, the governor has criticized the president for what he called a backlog of $58 million in funds from the federal government that haven't been delivered. The White House, in turn, blamed Congress.

Outlets have pointed out Scott's criticisms seem at odds with his past collaboration with the administration, forging an Everglades restoration deal with the Environmental Protection Agency in 2012. (Video via Miami Herald)

Scott has proposed spending $5 billion on Everglades projects over the next 20 years, although that's still pending approval from the Florida legislature. (Video via WPTV)

A report from the Florida Center for Investigative Reporting that said officials from the state's Department of Environmental Protection were banned from using the phrase "climate change" made international headlines.

Scott denied banning the phrase but has refused to answer questions about climate change since 2010, when he said he wasn't convinced it was real. (Video via Bradenton Herald)

So in that light, it's not too surprising Scott's speaking out against the president who has repeatedly pressed the issue of climate change or that the governor turned down the president's invitation to greet him at the airport Wednesday.