Is Obama's Delayed Visit To Louisiana After Floods All That Unusual? 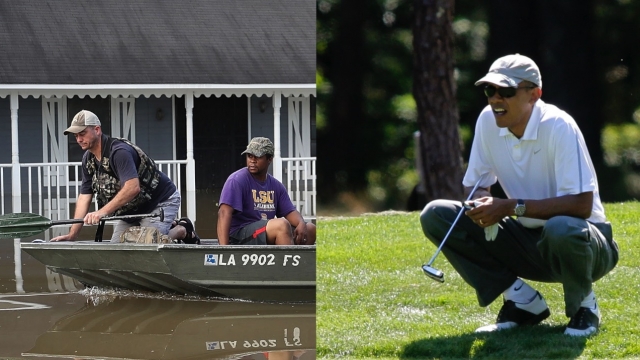 "He is unlikely to cut short his New England vacation to see all these floodwaters affecting communities like this one," CBS reporter Manuel Bojorquez said.

"Honestly, Obama ought to get off the course and get down there," Donald Trump told supporters at a campaign event.

After days of criticism, President Barack Obama visited Louisiana on Tuesday to survey the damage from the devastating floods that have ravaged Baton Rouge.

Obama didn't cut his vacation on Martha's Vineyard short to make the trip — and the images of him playing golf while water rescues continued weren't well-received.

Trump and his campaign did appear to help in relief efforts and made a donation, and Edwards praised him in return.

Edwards told CNN he asked the president to hold off on visiting.

"I didn't want to divert these police officers, sheriff's deputies and state troopers and other essential resources and assets to providing security for the president while they were needed in this region," Edwards said.

SEE MORE: No, Obama Isn't Having Another 'Katrina Moment'

That's apparently the same reason President George W. Bush flew over New Orleans after Hurricane Katrina instead of stopping there on his way back to the White House from his vacation. Unlike Obama, Bush did cut his vacation short, though he was still heavily criticized for a slow response.

Nearly 2,000 people died in Hurricane Katrina. By comparison, 13 have died in the most recent Louisiana flooding.

As The Washington Post points out, it's not uncommon for a president to hold off on visiting a devastated area.

At the mayor's request, President Obama held off on visiting New York City for about two weeks following Hurricane Sandy. He visited New Jersey two days after the hurricane hit.

And Obama waited nearly a week to visit Moore, Oklahoma, after a tornado killed 24 people in 2013.

An explosion on the Deep Water Horizon oil rig in the Gulf of Mexico on April 20, 2010, led to the nation's worst oil spill. It took days for experts to realize the extent of the leak. President Obama first visited the region about two weeks later.

So yes, the president has waited longer to visit Louisiana than he has other areas hit by disasters, but not that much longer.