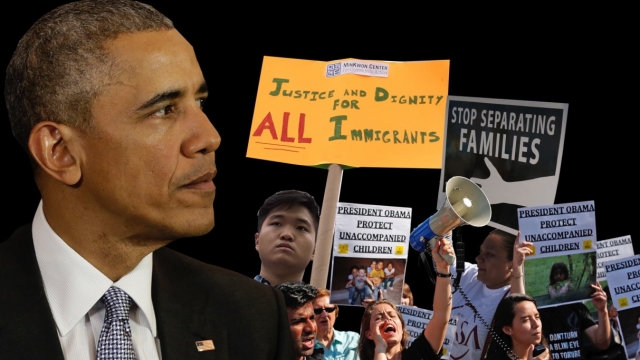 "We need to do it by the end of my first term. ... They need us to enact comprehensive immigration reform once and for all," President Obama said.

In 2008, Barack Obama promised he would reform immigration in his first four years. But it's been two terms, and a comprehensive immigration bill hasn't passed. Here's what happened.

In 2009, the country was in a recession and involved in two wars. Obama's proposed health care bill was also getting a lot of backlash. Remember this?

Yet while dealing with all that, Obama continued to push his immigration agenda.

He met with party leaders.

"Hello, everybody. We have just finished what I consider a very productive meeting," Obama said.

He spoke at universities.

"The system is broken. And everybody knows it," Obama said.

He traveled to border states.

"And now we need Congress to catch up," Obama said.

Despite his best efforts, in his first term, three comprehensive immigration bills died in the House and Senate.

Nine days into Obama's second term, it was clear comprehensive immigration reform would be more of a focus when he gave this speech in Las Vegas.

SEE MORE: 'Sí Se Puede' Has A History Off The Campaign Trail

The momentum came from eight senators who introduced a comprehensive bill that later passed in the Senate. But that bill didn't go any further. House Democrats introduced a similar bill with a few changes. It died.

And so did many others.

But public opinion on immigration was shifting. In a 2013 Gallup poll, 87 percent of Americans favored a path to citizenship for undocumented immigrants up from 64 percent in 2011.

And pro-immigration reform advocates became impatient as Obama continued to deport millions who were undocumented.

SEE MORE: Deportation Split Their Families, But This Park Lets Them Reunite

"You have the power to stop deportations for all undocumented immigrants," an audience member said.

"Actually, I don't, and that's why we are here," Obama said.

So in 2014, Obama took executive action.

"There are actions I have the legal authority to take as president ... that will help make our immigration system more fair and more just," Obama said.

Obama's three-part action aimed to expand the Deferred Action for Childhood Arrivals program and give amnesty to millions of undocumented parents who have lived in the U.S. for at least five years.

"Today, the Supreme Court was unable to reach a decision," Obama said.

So what can future presidents take away from Obama's eight-year immigration battle?