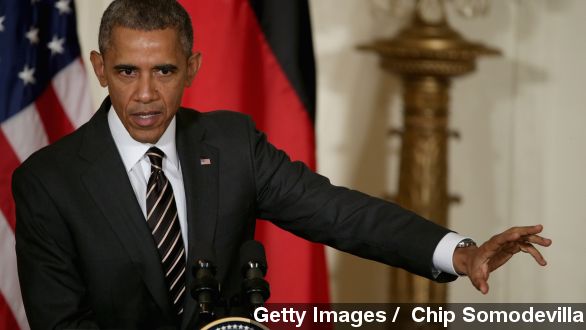 After five months of airstrikes in Syria and Iraq, President Obama is now asking Congress to formally approve a war against ISIS. (Video via U.S. Central Command)

This so-called AUMF, or Authorization for the Use of Military Force, sets up what's expected to be a drawn-out debate among lawmakers. (Video via The White House)

That last part suggests large-scale ground troops are out of the question, but certain scenarios for boots on the ground, like rescue missions, are permissible. (Video via U.S. Department of Defense)

The intentionally ambiguous language is designed to appease both hawkish Republicans who want the option for ground troops and war-weary Democrats who don't want an open-ended conflict.

So far, the White House had justified its war on ISIS using both a 2001 AUMF passed after the Sept. 11 attacks and a 2002 authorization for invading Iraq. The new resolution would repeal the 2002 AUMF.

President Obama is expected to deliver a statement on his proposal Wednesday afternoon.