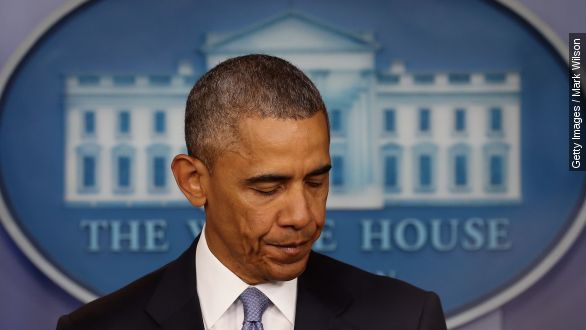 SMS
Obama 'Regrets' Deaths Of 2 Hostages In Counterterrorism Op
By Cliff Judy
By Cliff Judy
April 23, 2015
A U.S. counterterrorism operation on an Al-Qaeda compound in January killed two of the terrorist organization's hostages, an American and an Italian.
SHOW TRANSCRIPT

President Obama announced Wednesday counterterrorism operations against Al-Qaeda killed two "innocent hostages" in January, one of them an American citizen and one an Italian.

"I want to express our grief and our condolences to the families of two hostages," President Obama said.

The American killed was Warren Weinstein, a contractor in Pakistan who was kidnapped in August 2011. Al-Qaeda has since released several videos of Weinstein pleading for the U.S. to help him. (Video via The Washington Post / Al-Qaeda)

The Italian was Giovanni Lo Porto, who the White House said had been an Al-Qaeda hostage since 2012.

"I take full responsibility for all of our counterterrorism operations, including the one that took the lives of Warren and Giovanni," President Obama said. "I profoundly regret what happened." (Video via The White House)

While the president never addressed the nature of the attack or who carried it out, several Washington, D.C., media outlets report senior officials told them it was a CIA drone strike. (Video via CBS)

President Obama said at the time of the attack, U.S. intelligence officials had no reason to believe Weinstein or Lo Porto would be at a terrorist compound in the border region between Afghanistan and Pakistan.

Weinstein’s wife issued a statement saying her family was devastated by the news. The statement thanked a select few in Congress and the FBI for their help trying to get him back but called the efforts of other branches “inconsistent and disappointing." (Video via The Washington Post / As-Sahab)

“We hope that my husband's death and the others who have faced similar tragedies in recent months will finally prompt the U.S. Government to take its responsibilities seriously and establish a coordinated and consistent approach to supporting hostages and their families," Elaine Weinstein wrote.

The president said he ordered the operation declassified as soon as the cause of Weinstein and Lo Porto's deaths was determined. The president announced two other Americans were also killed in counterterrorism ops, both of whom had become members of Al-Qaeda and one of whom was a leader in the terrorist organization.

This video includes an image from Nazionale Anpas / CC BY NC SA 2.0.