Obama Plans To Stay Out Of The Democratic Primary — For Now 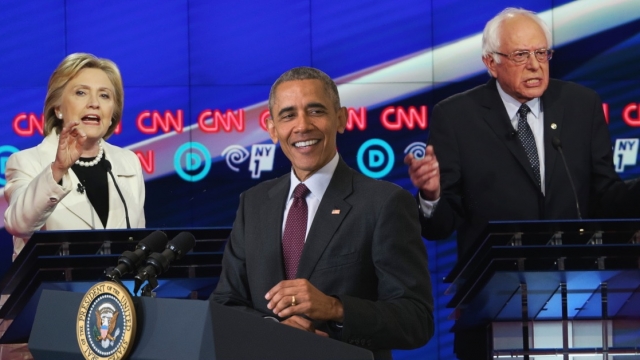 By Eugene Daniels
April 16, 2016
President Obama still hasn't publicly chosen between Clinton and Sanders, and aides say he might not until the primary is over.
SHOW TRANSCRIPT

The Democratic presidential primary is heating up, but if you're waiting for a presidential intervention in the race, it seems you're going to have to keep waiting.

A report from the Los Angeles Times cites administration officials saying President Obama isn't likely to choose a side, at least not until all the votes are cast in the primary.

The revelation isn't a big shock: Obama has been coy about his preference from the beginning and has remained quiet even as the race has become more competitive. And honestly, it's probably a good idea.

Presidential endorsements usually come late in the game, partly because they carry so much weight. Throw in President Obama's high approval ratings among Democrats, and his endorsement could change minds.

And in a year when Bernie Sanders' supporters already feel like the process has been rigged in favor of Clinton, Obama endorsing his former secretary of state will only look like he's tipping the scale.

As the primary gets more contentious, President Obama will likely play a huge role in uniting the party ahead of the general election. A united front against a fractious GOP gives the Democrats a bigger chance of holding on to the White House.