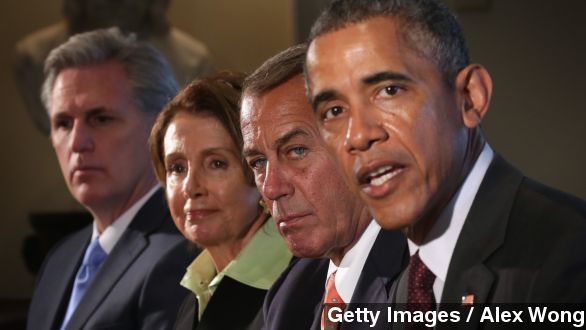 After facing criticism on multiple fronts, the White House says it has nixed a proposal that would've increased taxes on certain college savings accounts.

The savings accounts in question are known as 529s. President Obama alluded to his plan to levy taxes on them during his State of the Union Address.

They were created to make it easier for students to handle college expenses by allowing a tax break on money invested into the account. (Video via Ohio University)

The New York Times says the administration changed its mind on the proposal after "facing angry reprisals from parents and from lawmakers of both parties."

Critics of Obama's proposal had argued ending those tax breaks would kill incentive for college students to invest in 529s.

"If we raise taxes ... on 529 education accounts, which are savings for college, then we're discouraging people from putting that money aside to save for college," Independent Women's Forum policy analyst Hadley Heath Manning said.

"It's an attack on savers, right? And that's why there was bipartisan resistance to this. He didn't just have Republicans. He had Democrats saying, 'This is a bad idea,' too," Fox News Contributor Monica Crowley said.

"Why would you save when the government is going to pay for it?" a CNBC commentator said.

The Obama Administrations' rationale to eliminate those 529 tax breaks was that they would have, for the most part, affected high-income earners using them.

Citing various surveys, the White House argued 70 percent of the funds in those saving accounts came from households that earned more than $200,000 a year.

But that doesn't mean middle-class Americans aren't using them too. The Times says about 10 percent of all 529 investors earned less than $50,000. Or, as the outlet points out, "the rich may be reaping the clear majority of the tax break, but a lot of other people are benefiting as well."