Obama Tells Trump To Follow His Lead On Europe And Russia 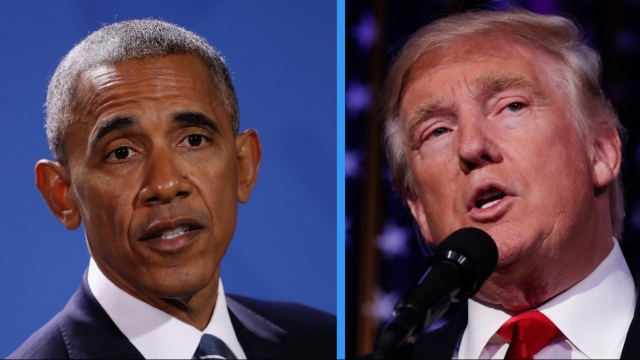 SMS
Obama Tells Trump To Follow His Lead On Europe And Russia
By Lauren Stephenson
By Lauren Stephenson
November 17, 2016
Obama touted the strength of the United States' alliances with European nations during a press conference with the German chancellor.
SHOW TRANSCRIPT

President Obama said Thursday he remains optimistic that Donald Trump's administration will continue to build upon the relationships the U.S. has with Germany and other European nations.

During a press conference, Obama and German Chancellor Angela Merkel showed a united front, touting the importance of a transatlantic alliance.

"If that voice is absent, or if that voice is divided, we will be living in a meaner, harsher, more troubled world," Obama said, describing the partnership between the U.S., Germany and other allies.

Trump has been critical of some of the country's alliances.

"We're protecting all of these countries. They have an agreement to reimburse us and pay us, and they're not doing it. And if they're not going to do that, we're going to have to seriously rethink at least those countries," Trump told Fox News in July.

Obama also urged Trump to stand up to Russia.

"My hope is that he does not simply take a realpolitik approach and suggest that, you know, if we just cut some deals with Russia, even if it hurts people or even if it violates international norms, ... that we just do whatever's convenient at the time," Obama explained.

The remark was a rare post-election rebuke from Obama. The president has generally put on an optimistic tone about Trump, predicting he'll temper his rhetoric in order to focus on governing.

"In a big, complex, diverse country, the only way that you can be successful is by listening and reaching out and working with a wide variety of people," Obama said.