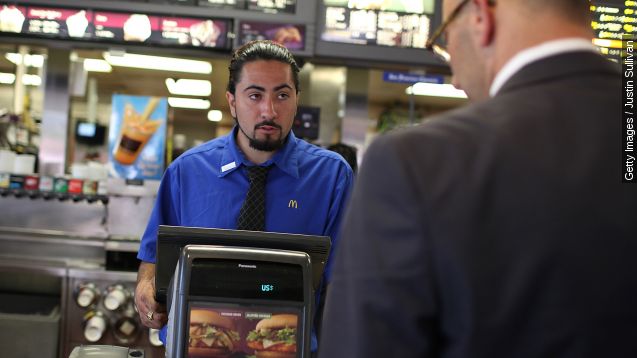 SMS
Obama Looks To Expand Overtime Coverage To Millions
By Jamal Andress
By Jamal Andress
June 30, 2015
President Obama wants to raise the overtime threshold for salaried workers to just over $50,000 a year, up from the current benchmark of $23,660.
SHOW TRANSCRIPT

While some major chains — like Starbucks, McDonalds and Domino's — have decided to raise their minimum wage, the federal minimum wage hasn't budged.

"We saw a majority of Senators saying yes, but almost every Republican saying no to giving America a raise," President Obama said.

So, as a plan B, it seems President Obama is working with the Labor Department to expand the number of employees who can receive overtime.

As it stands, federal law does not allow managers and executives to receive overtime pay. The federal government defines a manager as an employee who directs at least two other full-time employees, has the authority to hire and fire and is primarily doing managerial work throughout the day.

But Obama's change would raise the overtime threshold, which currently applies to salaried workers making under $23,660 per year or $455 per week. Employees making more than $455 per week are not eligible for overtime. The proposed rule would raise that threshold to just over $50,000.

The original threshold was set back in 1975 at $250 per week, and since then, it has only been raised one other time. In 2004, then-President George W. Bush raised that threshold to where it is now at $455 per week.

Proponents of this change point out the number of workers across the country who are eligible for overtime has dropped significantly since 1975 when the $250 per week threshold covered nearly 65 percent of American workers. Now, that number sits at 11 percent.

That being said, the usual suspects have come out against the proposed change. The National Retail Federation released a report saying employers will not pay more overtime if these rules go into effect but will instead lower hourly rates, hire more part time workers and reduce employee's hours.

The plan is widely expected to be challenged in court and perhaps in Congress.