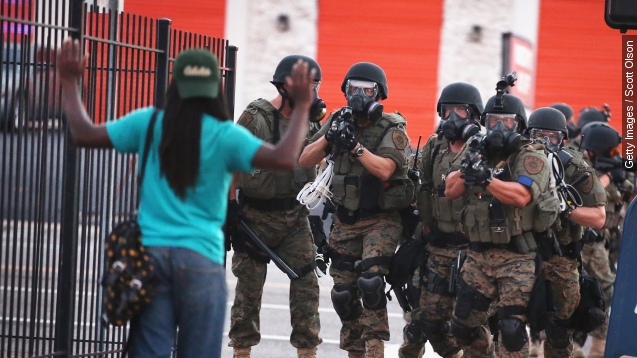 SMS
Obama Limiting Military-Style Equipment For Police
By Christina Hartman
By Christina Hartman
May 18, 2015
As part of a push to rebuild trust between police departments and the communities they serve, President Obama is limiting military-style equipment.
SHOW TRANSCRIPT

Local police departments' use of military-style equipment is about to be restricted — and in some cases — banned. (Video via YouTube / Keep Columbia Free)

Monday, President Obama will make the announcement as part of what his administration has called an effort to rebuild trust between police and the communities they serve.

"This is the St. Louis Police Department. Please return to your homes."

Observers have criticized police response to protests like the ones in Ferguson, Missouri as overly aggressive.

"They start throwing tear gas and shooting rubber bullets at all the protesters," one protester told the St. Louis Post-Dispatch.

A report to be released later Monday will encourage law enforcement to "embrace a guardian — rather than a warrior — mind-set to build trust." (Video via The White House)

As we've previously reported, weapons originally meant for battlefields in Afghanistan and Iraq are finding their way straight back home to U.S. police forces. The Pentagon's 1033 program makes that possible. It's passed by Congress every year as part of the defense budget and allows for extra military weapons and equipment to be transferred to law enforcement at almost no cost to police.

But that will change starting with President Obama's push Monday, when he'll announce a ban on federal funding for things like tanks and grenade launchers, weaponized aircraft and ammunition .50 caliber and larger according to NBC.