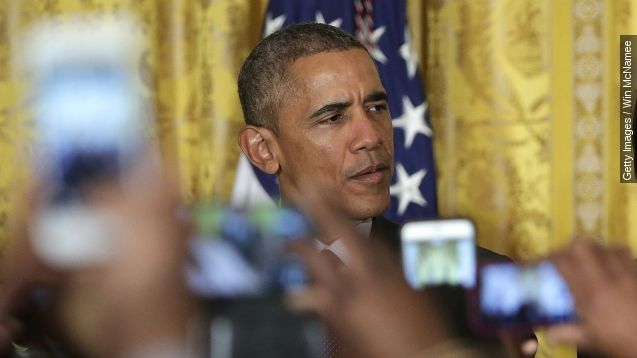 President Obama apparently wants to make sure we don't forget he's still around during his "lame duck" year. Especially online. (Video via The White House)

"Thanks for your time."

"Welcome to my set."

On Friday, the White House streamed "The YouTube Interview with President Obama" in which YouTube stars interviewed the president using questions from #YouTubeAsksObama. (Video via The White House)

The president has done Q&As like this throughout his presidency, in keeping with a campaign promise he made when first running for president. (Video via The White House)

"We're going to have sort of 21st-century fireside chats where I'm speaking directly to the American people through video streams," Obama said in 2007.

The White House, and the president specifically, have been upping the social media presence over the last few months. The White House joined Snapchat on Monday, and Obama held a Twitter interview with #AskPOTUS on Thursday.

It may be odd for a politician with just one year to go before he's (sort of) a normal citizen again to up the social media ante, but with opportunities to use his bully pulpit diminishing, social media could help Obama remain a significant part of our country's political discourse. (Video via The White House)

Right now, much of the political media are focusing on who the next commander in chief will be, but Obama can still influence that conversation by using social media to directly engage with his base, particularly young voters.

And getting young people to mobilize is something Obama has proven he's capable of, pulling in more than 60 percent of the youth vote in both of his presidential campaigns.

As the first president of the social media age, we can probably expect even more social media surprises from President Obama for next 12 months.