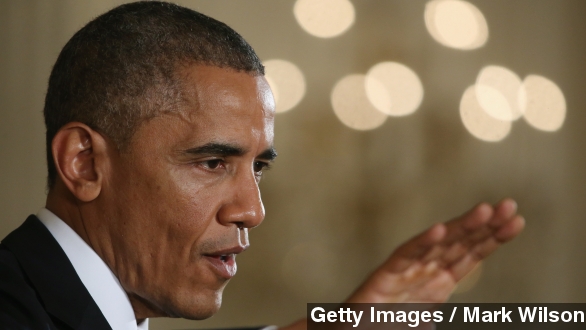 PRESIDENT BARACK OBAMA VIA THE WHITE HOUSE: "There are no gatekeepers deciding which sites you get to access, and there are no toll roads on the information superhighway. … That's why I'm laying out a plan to keep the Internet free and open."

Monday morning the Obama administration made a full blitz in favor of net neutrality with the White House releasing this video and and this statement on the contentious issue.

President Barack Obama has asked the Federal Communications Commission to implement four major rules to ensure net neutrality: no blocking by Internet service providers, no speeding up or slowing down Web content — also known as throttling — from ISPs, increased transparency between ISPs and the consumer and no paid prioritization.

OBAMA VIA ORGANIZING FOR ACTION: "We have to ensure free and full exchange of information, and that starts with an open Internet."

Obama's full-on support for an open Internet is something he's been promising since his 2007 presidential campaign.

This announcement from the Obama administration comes shortly after net neutrality protests made headlines across the country Thursday. Protesters took to the streets of D.C., New York, Boston, Chicago, Philadelphia and Las Vegas.

The Wall Street Journal reported more than a week ago that the FCC and its Chairman Tom Wheeler were considering a "hybrid approach to internet access" that would place more restrictions on ISPs but still allow them to provide special access to customers or charge for faster Internet.

Despite pressure from Americans around the country, huge media companies and the president, the decision still lies in the hands of the FCC, which has yet to comment on The Wall Street Journal's report.

This video includes images from Getty Images and Joseph Gruber / CC BY ND 2.0