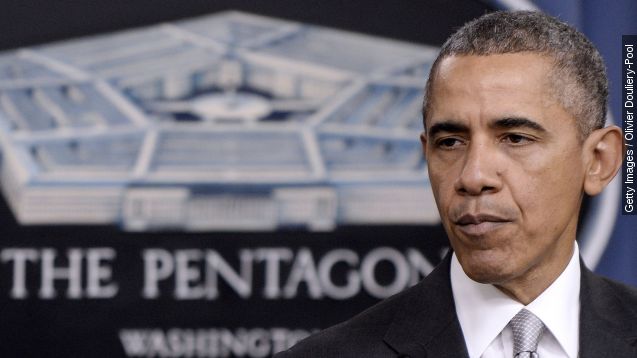 SMS
Obama Says ISIS Has Lost 40 Percent Of Its Populated Areas In Iraq
By Jamal Andress
By Jamal Andress
December 14, 2015
President Obama delivered another statement Monday on the U.S. fight against ISIS. There's still a lot to do.
SHOW TRANSCRIPT

"Our partners on the ground are rooting ISIL out, town by town, neighborhood by neighborhood, block by block. That's what this campaign is doing," President Obama said.

President Obama delivered a statement to the nation Monday on the U.S. fight against ISIS.

Obama says he intensified anti-ISIS efforts before the Paris attacks and offered some signs of progress.

"The point is ISIL leaders cannot hide, and our next message to them is simple: You are next," he said. "... So far, ISIL has lost about 40 percent of the populated areas it once held in Iraq."

Obama's comments follow a meeting at the Pentagon with Vice President Biden and US military leaders. It was the first such meeting since this summer.