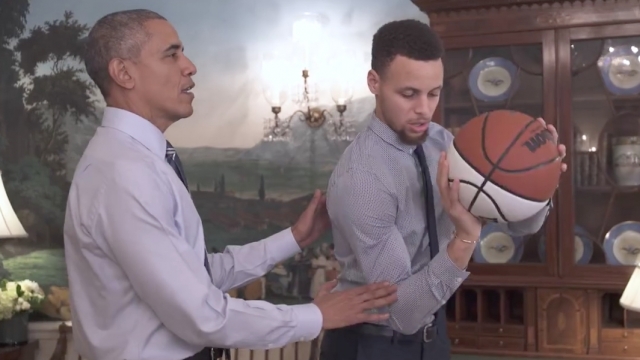 "Put your elbow in a little bit. Release," President Obama instructs Steph Curry in a PSA.

Finally, Steph Curry is getting help with his jump shot. The NBA star and 3-point-shooting marvel has teamed up with Obama to promote one of the president's big initiatives.

For about a minute, the president and Curry play mentor and mentee in a bunch of different scenarios. The PSA is part of the effort to push My Brother's Keeper, Obama's nationwide outreach program created in 2014.

"I could see myself in these young men, and the only difference is I grew up in an environment that was more forgiving," Obama said in the announcement of My Brother's Keeper.

The president created MBK to address "persistent opportunity gaps faced by boys and young men of color and ensure that all young people can reach their full potential." The White House has teamed up with businesses, cities and foundations to connect young people with mentors around the country.

And Curry's not the only big name attached. Kendrick Lamar, Alicia Keys, Nicki Minaj and other celebrities have also met with Obama to talk about the initiative.