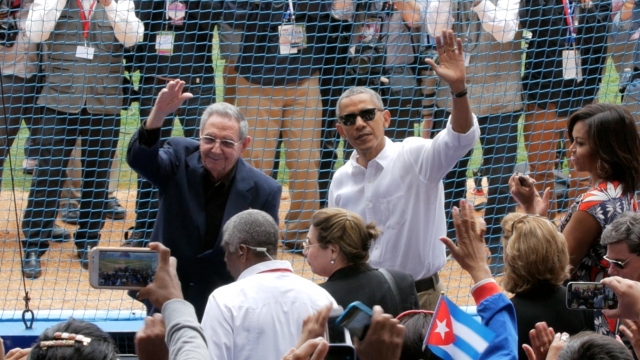 SMS
Obama Has To Keep Reminding Cuba He's Not Trying To Start A Coup
By Kate Grumke
By Kate Grumke
April 4, 2016
President Obama has to be careful with his words when he talks about Cuba because of a long and sensitive foreign policy history.
SHOW TRANSCRIPT

When Obama speaks to the Cuban people, he's careful with his words…

"I've made it clear that the U.S. has neither the capacity nor the intention to impose change on Cuba. What changes come will depend on the Cuban people. We will not impose our political or economic system on you," President Barack Obama said.

That's because Latin America is (rightfully) a little uneasy when the U.S. gets involved in politics south of the border.

Here's something I didn't learn in American public school: The U.S. has a history of helping overthrow governments in Latin America. And this isn't, like, a one time thing a really long time ago. The CIA supported coups in Guatemala in 1954, the Dominican Republic in 1961, Brazil in 1964 and Chile in 1973.

Here in Cuba that history is especially familiar. Over the years, the U.S. has tried to influence Cuba's politics, from the Bay of Pigs invasion, when U.S. officials trained Cuban dissidents to send them back to Cuba to try to overthrow Castro, to the embargo against the country, which is still in effect.

And just before Obama's trip to Argentina, in an effort to be more transparent, he announced the U.S. will declassify records showing just how much the CIA supported Argentina's repressive dictatorship during the country's dirty wars.

All together, this history of intervening has created a scar in the relationships between the U.S. and our neighbors in this hemisphere — one that hasn't totally healed.

That's why the Obama administration has to choose its words carefully when it talks to the Cuban people, and the rest of Latin America, about the opening of relations with Cuba.

The main point has to be that the U.S. isn't trying to back any more coups.