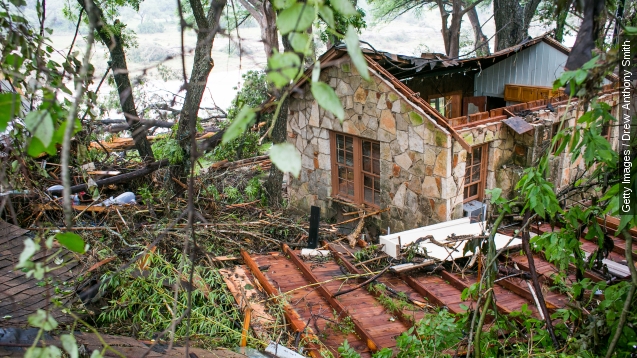 SMS
Obama Declares Disaster After Texas Flooding Worsens
By Jasmine Bailey
By Jasmine Bailey
May 30, 2015
Nearly 30 people have died due to the severe flooding in Texas but federal aid can now begin as Obama signs a disaster declaration.
SHOW TRANSCRIPT

A heartbreaking scene out of Texas this week, where flood waters have caused dozens of deaths.

"Twenty-six people were killed by these storms throughout the week included six-year old Andrew McComb. His father survived, his mother and sister are still missing," reports Fox News.

President Obama signed a disaster declaration late Friday, which will allow federal disaster assistance for Texas. Funding will be available for the counties of Harris, Hays and Van Zandt.

Residents in those areas can now request aid from FEMA. The declaration also allows some nonprofits to receive federal funding in order to assist emergency repairs.

Anheuser Busch has also taken a big step to help provide some relief — stopping production at a Georgia plant to begin canning drinking water for victims of both the Texas and Oklahoma floods.

And that help is much needed as the scene for many people is nightmarish. As of Saturday the National Weather Service reported 35 trillion gallons of rain has fallen over Texas during May.

To put things into perspective, just one inch of water can cause massive damage. Earlier this weekend some seven inches of rain fell over North Texas within a span of just a few hours.

"We could actually see what looked like barges going down the river and it was actually people's homes. ... It looked like the water was going five hundred miles an hour with debris just flying by," one resident told NBC.

And while dry weather is expected soon, allowing rebuilding to begin, some Texas residents will still be hit with storms over the rest of the weekend.

This video includes images from Getty Images and U.S. Government.