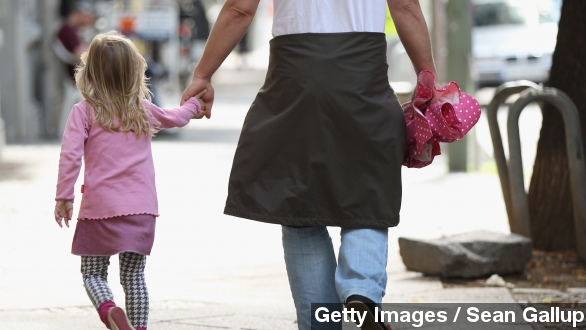 "Today, we’re the only advanced country on Earth that doesn’t guarantee paid sick leave or paid maternity leave to our workers. ... And that forces too many parents to make the gut-wrenching choice between a paycheck and a sick kid at home," said President Obama in his State of the Union address.

The president is pushing for the federal government to put up $2.2 billion to let states offer paid-leave programs. This, in contrast to family leave in its current state — which is often unpaid.

It's the question surrounding the rights of providers in working families to take time off work — without giving up the ability to provide for them financially as a result.

That group, now known as the National Partnership for Women and Families, continues to support the kind of FMLA expansion championed by President Obama in his State of the Union address.

It's a horn Obama has blown for a while now. This Forbes article from last summer points out Obama's vision of "workplace flexibility policies that would allow employees to better cope with the demands of parenting and caretaking."

But Obama's cheerleading at that time didn't have to contend with a Congress controlled by Republicans.

In all likelihood, Obama will have a hard time getting Congress to pass what's now referred to as the Healthy Families Act. Despite that wall at the federal level — it's possible Obama could court states instead.

Senior Obama adviser Valerie Jarrett played to her audience last week, touting the paid-leave proposal as a "right, not a privilege." And, oh yeah, she did so on LinkedIn, because business.

The U.S. is the only developed Western nation that doesn't universally offer paid maternity leave.