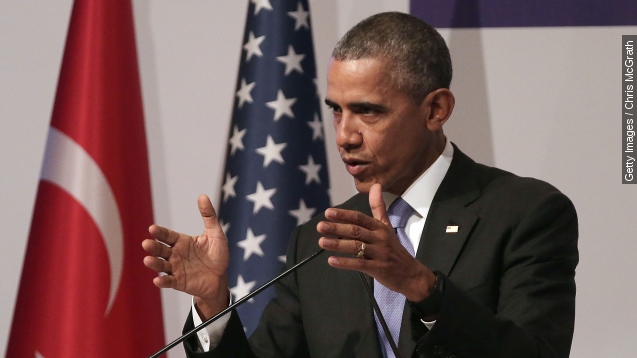 SMS
Obama Asks China To Halt Construction In South China Sea
By Kate Grumke
By Kate Grumke
November 18, 2015
The president is on a visit to the Philippines to talk trade and, apparently, military backing of allies.
SHOW TRANSCRIPT

President Obama's appearance at a trade summit in the Philippines took a turn toward military power, as he called on China to stop building up islands on reefs in the South China Sea.

"We agree on the need for bold steps to lower tensions, including pledging to halt reclamation, new construction and militarization of disputed islands in the South China Sea," Obama said.

China and other countries have been reclaiming land in the resource-rich Spratly Islands since 2014, which has created a territory dispute in the region. China says its island dredging is legal and that the Spratlys are its sovereign territory.

After visiting the flagship of the Philippine Navy, Obama gave a subtle reminder that the U.S. has an obligation to protect its allies in the region. (Video via Al Jazeera)

Obama pledged two new naval vessels for the Philippines and reiterated the U.S.' commitment of $250 million over the next two years for "maritime security assistance" in the region, which he announced on the trip.

"We intend to transfer two additional ships to the Philippine navy. ... More capable navies and partnership with the United States are critical to the security of this region," Obama said.