Obama Is Over People Thinking That Iran Money Was For Ransom 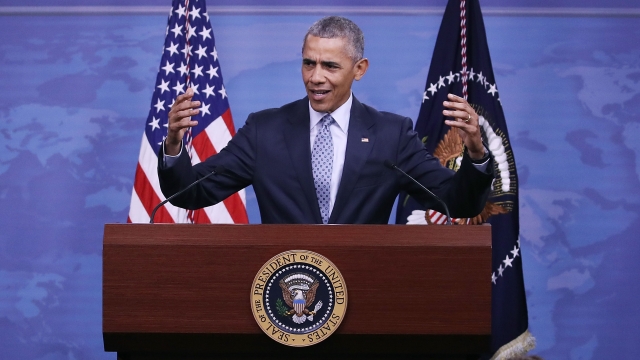 SMS
Obama Is Over People Thinking That Iran Money Was For Ransom
By Melissa Prax
By Melissa Prax
August 5, 2016
U.S. officials have denied the accusations for months.
SHOW TRANSCRIPT

President Barack Obama wants to make it clear that a $400 million payment to Iran wasn't for ransom.

That's because that payment was made Jan. 17, the same day four U.S. citizens detained in Iran were released in a prisoner swap.

Officials say the $400 million is part of a payment plan to settle a really old weapons order from the '70s — before the Iranian revolution and the U.S. froze the country's assets.

So while that payment went through at the same time, U.S. officials say it was unrelated to the Americans being freed.

"We do not pay ransom for hostages," Obama said.

This sounds almost identical to what they've been saying for months.

"I am reaffirming that the United States government will not make concessions, such as paying ransom, to terrorist groups holding American hostages," Obama said in June.

And a recent Wall Street Journal report reignited the conversation.

"It wasn't a secret. We were completely open with everyone again, and it's interesting to me how this is becoming a story again," Obama said.

It also led to outrage from some conservatives, especially those who've long spoken out against the deal.

Among them is Donald Trump, who claimed footage shown on Fox News was filmed by the Iranian government and shows the money transfer.

"Remember this: Iran — I don't think you heard this anywhere but here," Trump said.

News outlets label that footage as being shot in Geneva around the same time the Americans were freed. Trump acknowledged in a tweet Friday morning the video he referenced wasn't of the money transfer.

This video includes clips from TRT, WFTV, The White House, the U.S. Department of State and the U.S. National Archives and images from Getty Images and Kamal al-Din. Music provided by APM Music.