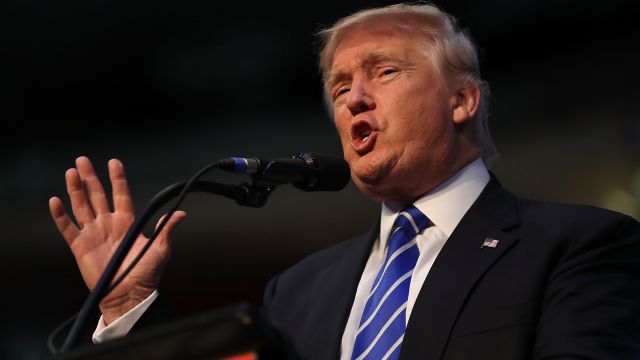 SMS
The New York Times Might've Thrown The Ultimate Shade At Donald Trump
By Matt Picht
By Matt Picht
September 29, 2016
In theory, the Times was reviewing a book about Hitler — but it sounded like it was actually talking about Trump.
SHOW TRANSCRIPT

Pop quiz: The New York Times recently published an article about "a politician who rose to power through demagoguery, showmanship and nativist appeals to the masses. ... regarded by many as a self-obsessed 'clown' ... [who] fomented chaos by playing to crowds' fears and resentments." Which politician is it talking about?

If you said Adolf Hitler, you're right! If you said Donald Trump, you're not alone.

Those quotes come from the Times' review of a new Hitler biography chronicling his rise to power. On the surface, the review dutifully records the book's observations about Hitler's journey from rabble-rousing orator to Germany's most powerful politician.

But in tweets and headlines, reporters noted there was a lot of overlap between the writer's description of Hitler and common criticisms of Trump.

The Times has plausible deniability, of course; the article doesn't mention Trump by name even once. But regardless of the paper's intentions, the article is being treated as a 1,300-word subtweet of Trump.

The Hitler-Trump comparisons are nothing new: Hitler's rise to power gives the establishment a useful parable about the dangers of letting far-right populism overrun the government.

It might even be true that Trump is pushing the same buttons Hitler relied on. A January 2016 survey found Trump supporters tended to support authoritarian viewpoints.

But it's also worth noting America today isn't facing the same pressures as Germany in the 1930s. A severe economic crisis and a sustained campaign of violence made it easier for the Nazis to seize total control of the government.

Trump, meanwhile, is relying on a strong anti-establishment sentiment in voters and his personal branding as a super-successful businessman. Those traits might propel Trump to power, but they seem less likely to destroy the republic.