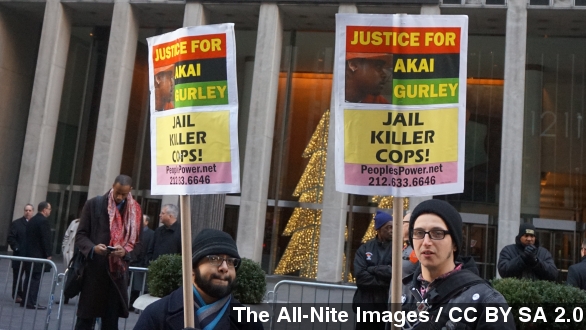 Last November, in the tense days before the grand jury decisions in the deaths of Michael Brown and Eric Garner, an unarmed black man was shot and killed by New York City police. But unlike in those cases, the grand jury in the death of Akai Gurley will reportedly indict the officer involved. (Video via WCBS)

New York news outlets reported Tuesday that Officer Peter Liang will be charged, possibly with second-degree manslaughter, for shooting 28-year-old Gurley by accident while on patrol in a housing project.

Officer Liang and his partner were in an unlit stairwell at the project when Liang's gun went off. Gurley, who was a floor below the officers, was hit in the chest in front of his girlfriend. (Video via WCBS)

Gurley's story became part of the protests that broke out after the Brown and Garner decisions, with critics citing it as another example of police violence. (Video via NBC)

Gurley's mother Sylvia Palmer told CNN: "I want justice for my son. I want the police officer fired, I want his badge taken away, and I want him punished."

But the NYPD says it was just a tragic accident.

The case echoes a 2004 shooting when a startled officer killed 19-year-old Timothy Stansbury while patroling a rooftop at a housing project. (Video via WABC)

The officer wasn't indicted in that accidental shooting case, so what's the different this time?

Part of it might be that neither Liang nor his partner called for help until more than five minutes after the shooting, with reports saying Liang texted his union representative instead.

There may also be some form of negligence in the charges. Officers can draw their guns while on patrol, but police sources say Liang might have been trying to open a door and hold his gun with the same hand at the time of the shooting. The official charges will be announced Wednesday.