NYC's New Wi-Fi Hot Spots Are Cool, But Are They Necessary? 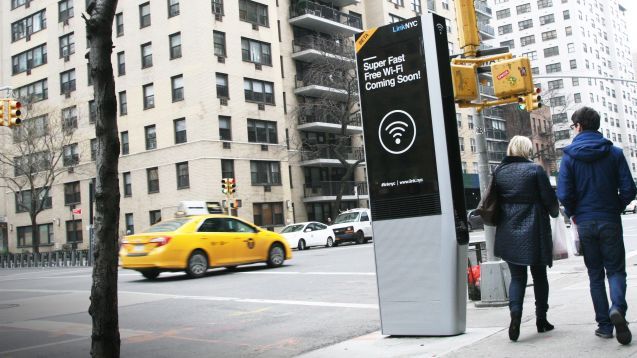 SMS
NYC's New Wi-Fi Hot Spots Are Cool, But Are They Necessary?
By Katie Link
By Katie Link
January 5, 2016
Out with the old, vandalized pay phones, in with the new, shiny, free Wi-Fi hot spot pillars.
SHOW TRANSCRIPT

Oh, New York City — the Big Apple, the City That Never Sleeps, the home of free Wi-Fi kiosks? — Wait, one of those is new.

The city is replacing thousands of old pay phones with sleek new Wi-Fi hot spots called Links. Over the course of the next several years, at least 7,500 units will be installed throughout the city's five boroughs.

The project came out of Mayor Bill de Blasio's 2014 competition to repurpose pay phone infrastructure. According to The Wall Street Journal, the city's pay phones had become "a target for vandals" and useless for citizens — hence the need for a makeover.

But this is a pretty costly makeover. Installing the fiber optic network needed to deliver high-speed Wi-Fi to these areas will cost CityBridge, the consortium of companies behind the project, more than $200 million.

And as much as we love free things, we're wondering why New Yorkers couldn't just leech off of the free Wi-Fi in a coffee shop or store like the rest of us instead of standing out in the elements next to a 9-and-a-half-foot tall pillar.

And then there's the potential problem of making already crowded sidewalks even more cramped. But according to de Blasio's administration, this is one way to "close the digital divide" between low and high-income families in the city.

"We must have universal, affordable, high-speed Internet access throughout this city. It's as simple as that," de Blasio said at Internet Week New York Festival.

CityBridge hopes to have 500 kiosks up and running by July.

This video includes images from Getty Images and CityBridge.