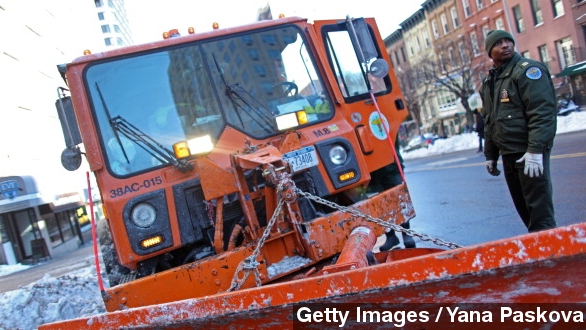 Much of the country's Northeast is gearing up for another blizzard, and the media and New York City mayor are already calling it one of the worst storms ever for the region.

"This literally could be one of the top two or three largest storms in the history of this city. ... My message for all New Yorkers is to prepare for something worse than we have seen before," said Mayor Bill De Blasio.

"A major winter storm charging across America right now. Millions of America living in the North East directly in the crosshairs," said one ABC anchor.

New York is expected to get up to 36 inches through Monday and Tuesday. To put that into perspective, the city's largest snowfall ever was 26.9 inches in 2006. (Video via WCBS)

Huge swaths of the region are under blizzard warnings. Mashable reports that National Weather Service warnings have been issued from Atlantic City, New Jersey to Eastport, Maine. That's a stretch of 540 miles.

Schools in New York are expected to remain open Monday, at least, something Fox News anchors disagreed with.

"I hate to go outside what the schools should be doing right now and that's canceling school. ... I really think if you are a parent, my kids are staying home tomorrow," said Fox News's Janice Dean.

Along with the snow, the storm is expected to bring wind gusts up to 70 miles per hour.