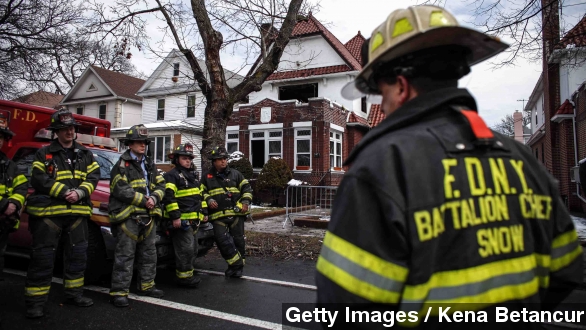 A fire in Brooklyn claimed the lives of seven children early Saturday morning.

"It it unimaginable what you see in there. You can literally see what was a home for a large and strong family, and now it is wiped out. Every room empty and burned and charred," said de Blasio.

Officials say four boys and three girls aged between 5 and 15 were killed in blaze. The children's mother and her 14-year-old daughter managed to make it out of the home and are being treated for burns and smoke inhalation.

The blaze was reportedly started by a hot plate that was keeping food warm. The family is Orthodox Jewish and it is their custom not to light a flame or use a stove on the Sabbath. So people sometimes turn on a hot plate before the Sabbath begins to keep food warm throughout the day.

Officials say they found no smoke detectors on the first or second floors of the home. One was found in basement but it's not clear if it went off.

The mother and daughter were able to make it out of the home because they were towards the front of the house when the fire started.

Authorities are calling it the "largest tragedy by fire" for New York in nearly a decade.