Can NYC Find Room For Tourists And Residents On The Brooklyn Bridge? 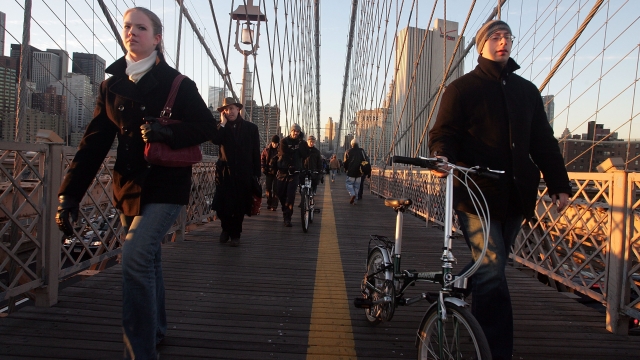 For tourists, the Brooklyn Bridge offers unparalleled opportunities for photos of New York City. For New Yorkers, the bridge offers a bunch of selfie-taking obstacles who get in the way of morning bike rides.

The New York City Department of Transportation is trying to fix that reputation. It's researching possible ways to widen the bridge to give pedestrians and cyclists more room to cross.

Last year, nearly 2,000 people per hour crossed the bridge during peak foot traffic times. But the bridge is just 10 feet wide in some parts, and residents say that's causing problems.

One cyclist told the New York Post, "There is definitely not enough space, and people don’t stay in their lanes."

It's too early to estimate the price tag for the overhaul itself, but New York City is shelling out $370,000 just to study how much it would cost.

These conceptual renderings show what the bridge could look like with separate paths for people on bikes and on foot, but that's probably a long time and a lot of money away.

This video includes images from Getty Images and the City of New York. Music provided courtesy of APM Music.