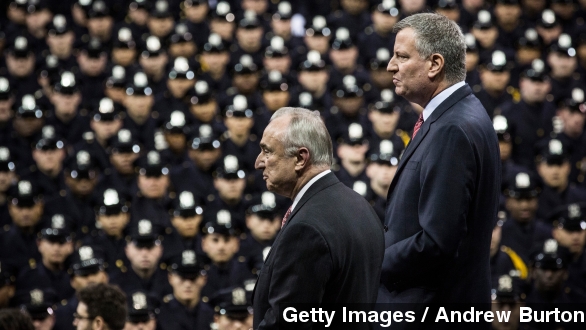 SMS
NYC Arrests Down Drastically Amid NYPD, De Blasio Rift
By Jay Strubberg
By Jay Strubberg
December 31, 2014
Things could get worse before they get better in the rift between the NYPD and Mayor Bill de Blasio following recent killings of two New York cops.
SHOW TRANSCRIPT

Things could get worse before they get better in the rift between the NYPD and Mayor Bill de Blasio following recent killings of two New York City cops.

Tuesday, de Blasio met with Police Commissioner William Bratton and a handful of union reps to hash things out and try to find a resolution to safety concerns brought forward by union leaders.

Thousands of officers have even turned their backs on de Blasio on various occasions, including when he spoke during the funeral for Officer Ramos, one of the officers killed apparently in response to the verdict in the Garner case.

But the unions say the talks made little progress.

Patrolmen's Benevolent Association President Pat Lynch told reporters, "There was no resolve and our thought here today is that actions speak louder than words and time will tell."

And a chorus of boos could be heard when he made his way to the podium at Monday's NYPD Graduation Ceremony.

De Blasio's critics say the mayor responded poorly to the protests that followed the grand jury's decision not to indict the officer involved in the death of Eric Garner, accusing him of taking sides against the police.

"It's now my pleasure to introduce the mayor of the city of New York, the honorable Mayor Bill de Blasio."

The icy relationship between de Blasio and NYPD unions might also be affecting how officers are policing the streets of New York City recently.

According to the New York Post, police arrests for minor offensives are drastically lower this December than at the same time last year.

One anonymous NYPD officer told the outlet, "I'm not writing any summonses. Do you think I'm going to stand there so someone can shoot me or hit me in the head with an ax? I'm concerned about my safety. I want to go to home to my wife and kids."

And from the police commissioner:

Commissioner Bratton told CBS, "The morale of the department is low. There's no getting around that. That's the reality at this time."