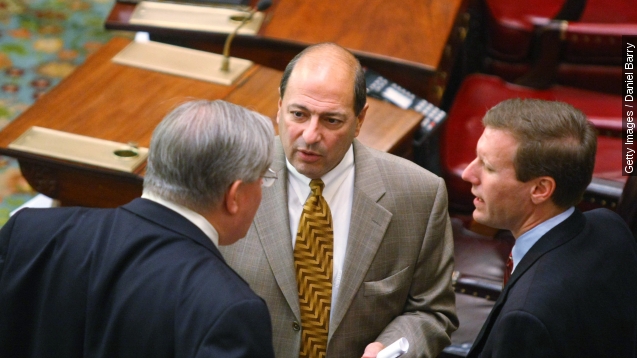 SMS
NY State Senator Found Guilty Of Lying To FBI
By Steven Sparkman
By Steven Sparkman
July 22, 2015
Tom Libous will lose his seat in New York's Senate after he was convicted of lying to investigators about a corruption case.
SHOW TRANSCRIPT

A long-time state senator in New York faces up to five years in prison after he was convicted Wednesday of lying to the FBI.

Tom Libous got a visit from federal agents in 2010, asking how his son Matthew got hired at a law firm. They were investigating whether the senator had used his influence as the second-ranking Republican to get his son the job. (Video via Tom Libous)

The jury found Libous guilty of lying during that encounter. The conviction will cost him his seat.

The trial had some interesting moments. Prosecutors argued Libous' son couldn't have gotten the job legitimately. The New York Post quoted one prosecutor as saying, "Why would you hire anyone who got drunk at the holiday party and propositioned the senior partner’s wife?" (Video via Time Warner Cable News)

It was also the latest in a steady stream of high-profile corruption investigations lead by U.S. Attorney Preet Bharara, described by the New York Daily News as an "anti-corruption crusader." Bharara said in a statement, "Libous’s lies have been exposed, his crime has been proven, and Albany will be the better for it." (Video via U.S. Department of Justice)

Matthew Libous is also set to head to prison over a six-month sentence for tax fraud.

This video includes a images from Getty Images.