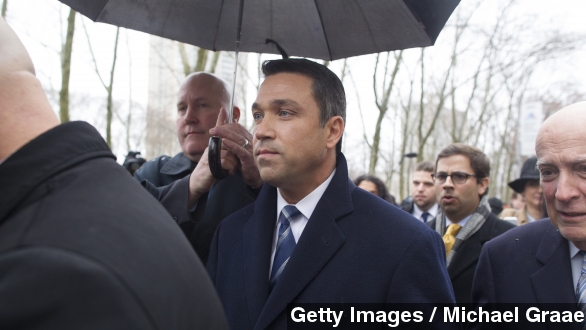 Around this time last year, Rep. Michael Grimm of New York was asked about his campaign finances. He responded poorly.

Grimm told the reporter, "If you ever do that to me again, I'll throw you off this f***ing balcony."

Fast forward to now, and Grimm's legal woes have finally caught up with him. The New York Daily News reports the congressman will step down after pleading guilty to one count of tax evasion.

The report claims Grimm's decision comes after a talk with House Speaker John Boehner on Monday, and that the official announcement will be made Tuesday or Wednesday. When he announced his guilty plea last week, Grimm initially said he intended to keep his seat.

Grimm told reporters, "As long as I'm able to serve, I'm going to serve. As of right now, I'm still in a capacity to serve, and that's exactly what I plan on doing."

The congressman has been dogged by allegations that he concealed over $1 million in profits from federal tax authorities while running a Manhattan restaurant prior to entering Congress.

Despite the charges, Grimm coasted to victory in the November midterm elections over his Democratic opponent Domenic Recchia. Now that he's stepping down, there'll need to be a special election to fill his place.

Grimm's sentencing, which could come with jail time, is scheduled for June 8.