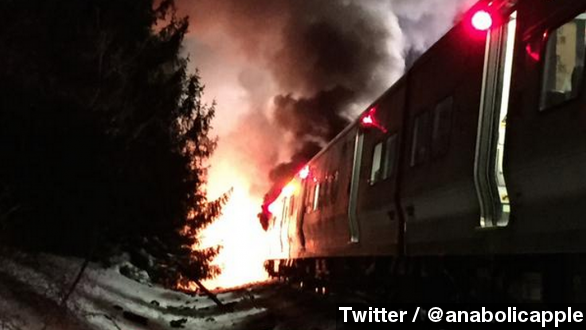 At least six people were killed in a collision Tuesday night when a train crashed into an SUV on the tracks in Valhalla, New York. (Video via YouTube / James Barnett)

CNN says, of the six deaths, five were passengers on board and the sixth was the driver of the SUV. The driver became stuck "when the crossing gates came down on top of [her] Jeep Cherokee that was stopped on the tracks."

The number of people killed in the accident remains in flux. ABC quotes Metropolitan Transportation Authority officials who report "numerous fatalities." The outlet also says at least 12 passengers were injured in the collision. There were at least 750 passengers aboard the train.

Officials worked quickly to evacuate passengers as a fire burned at the front end of the train.

The New York Times quotes an MTA spokesperson who says many of the passengers have been moved to a rock-climbing gym for shelter.

Multiple reports indicate both New York Governor Andrew Cuomo and the National Transportation Safety Board are headed to the scene. (Video via WNBC)