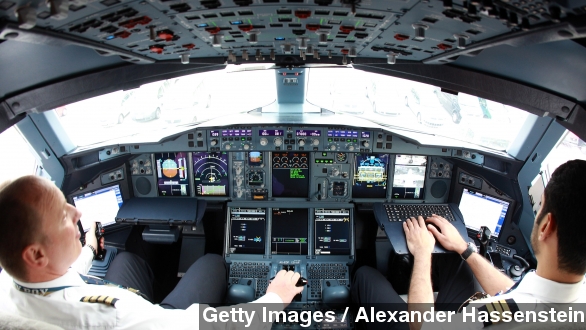 SMS
NTSB: Missing Planes' Black Boxes Should Transmit Wirelessly
By Cliff Judy
By Cliff Judy
January 23, 2015
In light of high-profile plane disappearances in the past year, the NTSB has called for changes to make finding missing aircraft easier.
SHOW TRANSCRIPT

Puzzling plane disappearances, massive underwater searches and a complete lack of answers for family members of the victims in the last year. All of that has the National Transportation Safety Board calling for changes to make sure missing planes are easier to find.

On Thursday, the NTSB released this 13-page letter sent to the Federal Aviation Administration and the bureau's chairman wrote in a statement, “Technology has reached a point where we shouldn’t have to search hundreds of miles of ocean floor in a frantic race to find these valuable [black] boxes. In this day and age, lost aircraft should be a thing of the past.” (Video via BBC)

The last year alone saw the high-profile disappearances of Malaysia Airlines Flight 370 and AirAsia Flight 8501, both of which lost communications over water within an hour of takeoff and presumably crashed into the ocean killing all of the hundreds of people on board. (Video via Euronews and Joint Agency Coordination Centre)

The changes the NTSB recommended include a way for crashed planes to transmit their location up to six nautical miles and for up to 90 days, have equipment that can transmit flight data without the underwater recovery of a black box and require airlines to install cameras in the cockpit.

The NTSB noted more than just this past year's missing plane tragedies in its letter, and the chairman also wasn't shy about noting the bureau has called for these changes before.

As part of the report, the NTSB cited Air France Flight 447 from 2009. The jet flying from Rio de Janeiro to Paris disappeared over the Atlantic and took nearly two years and $40 million to recover the plane's flight recorders. (Video via CNN and CBS)

The report also has an entire section dedicated to its previous recommendations dating back to 2000 for ways to prevent tampering with flight recorders and installing cockpit cameras.

Pilots — or at least, the union that represents them — weren't terribly thrilled about the camera and video recorder idea.

While the NTSB said those video recordings could give investigators a better understanding if something went wrong, the Air Line Pilots Association president called them a "premature overreaction."

He wrote, "Cockpit image recorders will not improve safety and could, in fact, impede it by diverting limited resources that could be used for more valuable safety enhancements."

As for the FAA's response to these latest recommendations, it issued a statement to several media outlets that it would carefully review them and make a formal response at a later date. (Video via Joint Agency Coordination Centre)