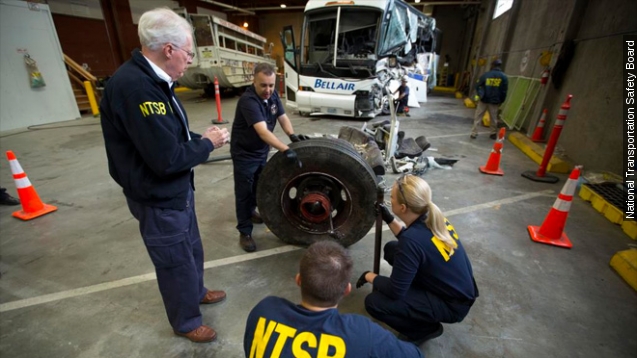 SMS
NTSB Focuses On Broken Axle In Wash. Duck Boat Crash
By Evan Thomas
By Evan Thomas
September 27, 2015
The National Transportation Safety Board says it's too early to tell if a broken front axle contributed to the fatal accident.
SHOW TRANSCRIPT

The National Transportation Safety Board is investigating Thursday's fatal accident in Seattle, between a tour bus and an amphibious DUKW, or "Duck boat."

NTSB officials say the front left axle on the Duck boat was sheared off. It's not yet clear when the damage occurred or whether it contributed to the accident. (Video via CBS)

"We do plan to take that, along with other parts of the front axle and front drive mechanism, and send it back to our laboratories in Seattle, where we can really understand the fracture characteristics," said the NTSB's Earl Weener. (Video via the National Transportation Safety Board)

"The Duck was in the far right lane going northbound, and it seemed to start to weave towards the middle lane. ... He overcorrected to get away from the barrier and shot across all five lanes, or four lanes," an eyewitness told KIRO.

The crash killed four people and put 15 others in the hospital. Hospital officials told CNN five of those patients remain in critical condition. (Video via CNN)

This video includes an image from the National Transportation Safety Board.