NSA Shooting May Have Resulted From Wrong Turn 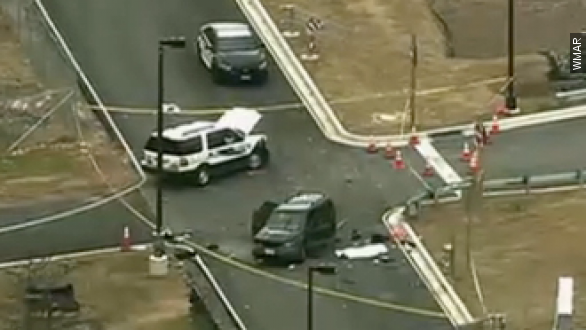 We now know more about the shooting that took place at the National Security Agency in Fort Meade, Maryland Monday morning.

"We have heard that they had been at a Jessup motel and may have taken that car — stolen it if you will — without someone's permission," WMAR's Jeff Hager said.

That has since been confirmed by several media outlets. The New York Times quotes a member of law enforcement who said the SUV's owner had spent the night in a hotel with the two men. On Monday the two men stole the SUV and "exited I-295 at the special N.S.A. exit, which is closed to the public."

Our partners at WMAR say there was cocaine and a weapon found "in or near the suspects' car." One of the suspects was killed and the other was injured — an NSA officer was also injured in the crash.

According to The Washington Post, law enforcement officials say shots were fired after the driver of the SUV "ignored police commands to stop." It's still unclear if the death was a result of the gunfire or the crash.

Officials immediately detained reporters, keeping them about a mile or more away, according to Fox News. Detainment continued throughout the day, so the only images we were getting from the incident were from news helicopters.

According to its website, the installation at Fort Meade houses around 11,000 military personnel and 29,000 civilian employees. The FBI and NSA continue to investigate the incident. (Video via WMAR)