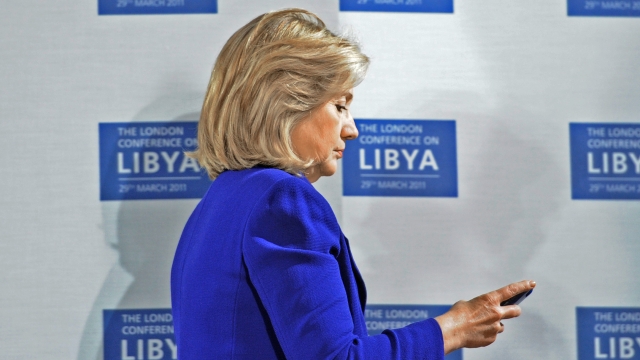 SMS
NSA Denied Clinton Request For Secure 'BlackBerry-Like' Device
By Eugene Daniels
By Eugene Daniels
March 17, 2016
Clinton apparently fell in love with the BlackBerry while running for president in 2008 and wanted something like it as secretary of state.
SHOW TRANSCRIPT

According to newly released emails, the National Security Agency denied former Secretary of State Hillary Clinton a secure "BlackBerry-like" device, but she used one anyway while serving as the nation's top diplomat. The emails were released through a Freedom of Information Act request from the conservative group Judicial Watch.

Clinton apparently fell in love with the BlackBerry while running for president in 2008 and wanted something like it while leading the State Department. Her staff asked the NSA for basically a modified BlackBerry, similar to what President Obama ended up using, but was told no.

The State Department's assistant director for security infrastructure wrote in an email, "Each time we asked the question 'What was the solution for POTUS?' we were politely asked to shut up and color."

But that didn't seem to stop Clinton's team. Her chief of staff asked for waivers that were given to Clinton's predecessor, Condoleezza Rice, but the NSA actually stopped using those waivers because of security concerns.

A representative with the NSA told Clinton's team they were concerned with the BlackBerry's security capability, but the actual reason Clinton wasn't given a phone like the president's hasn't been disclosed.

It's also not clear how the whole situation was resolved. One email said State would be working with the NSA for some type of solution.

These new emails are sure to rile up critics of Clinton's use of a private email server while she was secretary of state; it's been a nagging problem since she began her race for the White House. The issue is a part of an FBI investigation into whether confidential information was ever mishandled.

And the president of Judicial Watch hopes the revelations will be of interest to the FBI, saying, "These documents show that Hillary Clinton knew her BlackBerry wasn’t secure. Then why did she use it to access classified information on her illicit email server?"