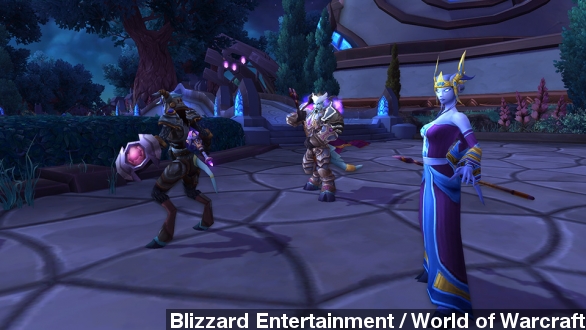 In World of Warcraft, gamers have been interacting with characters like orcs, mages, druids — and undercover NSA agents.

In a joint report by The Guardian, The New York Times and ProPublica, Edward Snowden released official documents claiming the National Security Agency has been collecting information from various online gaming systems for years. (Via YouTube / World of Warcraft)

"The agency feared that terrorists and other criminals would use the games to plot attacks. These reports claimed NSA agents went as far as to create make believe characters while collecting data on other players." (Via CNN)

The 2008 documents specifically cited World of Warcraft, Second Life and Xbox Live as potentially dangerous arenas for terrorist activity that the NSA and its British sister group, GCHQ, have been monitoring. (Via The Guardian)

In addition to creating avatars and joining gameplay in an effort to monitor and even recruit gamers, the agencies also reportedly collected data regarding the communications between players. (Via YouTube / Second Life)

A spokesperson for Blizzard Entertainment, the company behind World of Warcraft, said the company is unaware of surveillance and had never been contacted for permission to mine information. Microsoft declined to comment.

The NSA stated in the documents that terrorists commonly use "feature-rich Internet communications media" in an effort to communicate anonymously and could use online games to "hide in plain sight." (Via YouTube / Jake Alexander)

According to The New York Times, "So many C.I.A., F.B.I. and Pentagon spies were hunting around in Second Life ... that a 'deconfliction' group was needed to avoid collisions."

Despite all that gaming on the NSA's part, there appears to be no successful counterterrorsism action completed based on these strategies.

One writer for ComputerWorld puts it bluntly. "​If you are a gamer, then you probably realize hunting for terrorists this way is a complete waste of time."

It might seem ridiculous to picture government agents running around as orcs, but these reports once again raise the question of privacy vs. security — even if it's in a magical virtual reality.