Now Google Wants to Fill the Skies With 'Energy Kites' 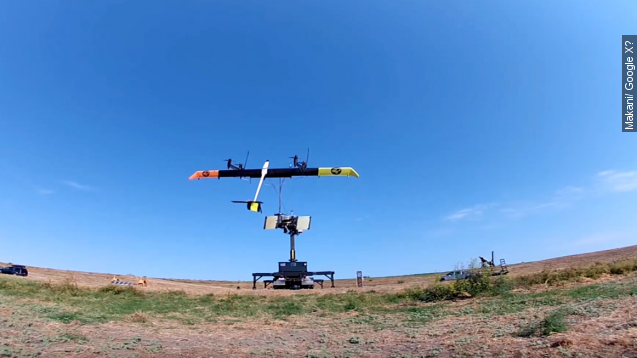 SMS
Now Google Wants to Fill the Skies With 'Energy Kites'
By Katie Link
By Katie Link
December 1, 2015
Google's going airborne with its latest high-tech venture, and it needs some employees to help make it happen.
SHOW TRANSCRIPT

If you've been racking your brain wondering what Google might do next, here's your answer: build energy kites. Well, at least it's hiring the people needed to build those energy kites. (Video via Makani)

And based on the amount of recently posted job openings for this new project, we're guessing those airborne wind turbines could be a reality sooner rather than later.

Here's how they work: The kite part of the device simulates the tip of a wind turbine blade. Rotors on the kite act like propellers. The device is tethered to the ground station and a computer system guides the kite's path based on wind patterns to generate the maximum amount of energy. (Video via Makani)

But this isn't Google X's first venture into the skies. A separate project, called Project Loon, is working to bring Internet to the masses, via a high-tech hot air balloon of sorts. (Video via Project Loon)

And taking inventions airborne is nothing too new. Amazon is toying with delivery drones and Facebook is experimenting with solar-powered Internet beaming drones. (Video via Amazon)

But like Google X's Makani energy kites, all of these products are still in the testing phase. Business Insider reports Makani started testing a 600 kilowatt energy kite in California earlier this year. No word on when, or if, more kites will be up for flying.