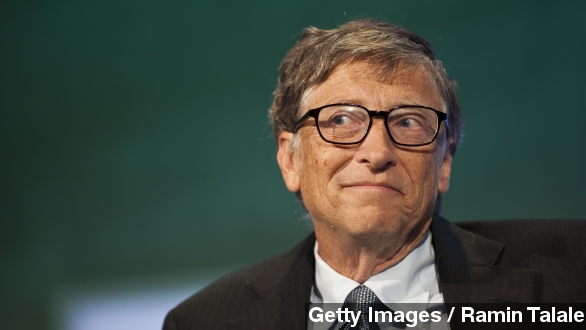 SMS
Now Bill Gates Is 'Concerned' About Artificial Intelligence
January 29, 2015
Bill Gates joins the list of tech moguls scared of super-intelligent machines. He says more people should be concerned, but why?
SHOW TRANSCRIPT

Bill Gates is scared of super intelligent machines, and he thinks you should be too.

Okay, so the word he used was concerned, but still, the picture he painted in his Reddit "Ask Me Anything" session was ominous at best.

"First the machines will do a lot of jobs for us and not be super intelligent. ...  A few decades after that though the intelligence is strong enough to be a concern. I agree with Elon Musk and some others on this and don't understand why some people are not concerned," Gates wrote.

Gates is referencing the fears of SpaceX CEO Elon Musk, who has spoken out about the dangers of artificial intelligence on several occasions. (Video via TED)

Musk told an audience, during a question and answer session at the Massachusetts Institute of Technology, "With artificial intelligence we are summoning the demon ... you know all those stories with the guy with the pentagram and the holy water and he's sure he can control the demon ... it doesn't work out."

The two share their position with Professor Stephen Hawking, who has made similar warnings.

Hawking told the BBC, "Once humans develop artificial intelligence it would take off on its own and redesign itself at an ever-increasing rate ... Humans, who are limited by slow biological evolution couldn't compete and would be superseded."

That kind of talk, especially from those kinds of figures, hasn't gone unnoticed, but, as Gary Marcus writes for the New Yorker, despite attracting the attention of a number of media outlets, "Most people see that sort of fear as silly science-fiction drivel—the stuff of 'The Terminator' and 'The Matrix.' To the extent that we plan for our medium-term future, we worry about asteroids, the decline of fossil fuels, and global warming, not robots."

Musk in particular has urged that there be some sort of national and international regulatory body in charge of ensuring AI doesn't advance to the point of a Terminator-style Skynet. (Video via Orion Pictures / 'The Terminator')

But there are also those who argue AI could present a great opportunity for advancing the human race, rather than destroying it.

While he concedes safeguards are necessary, Dominic Basulto writes for The Washington Post, "AI has given us speech recognition, image classification, autonomous vehicles and machine translation. Thinking in terms of 'existential reward' is what leads one to think about the future as one of abundance, in which AI helps — not hurts — humanity."

For what it's worth, it won't take super intelligent machines to make luminaries like Gates feel stupid: the billionaire conceded in the same Reddit AMA that his ignorance of foreign languages already does that.

This video includes images from Getty Images and music by Broke For Free / CC BY NC 3.0.