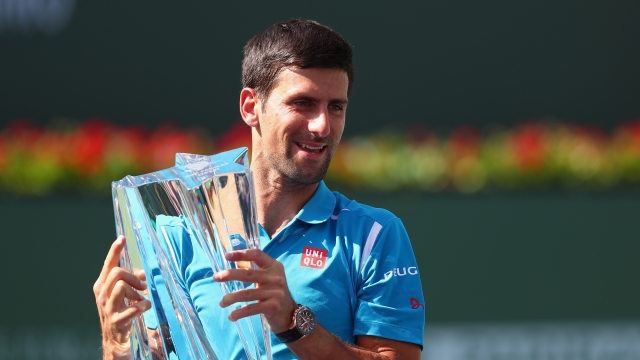 SMS
Novak Djokovic: Men's Tennis Should 'Fight For More' Money Than Women
By Matt Moreno
By Matt Moreno
March 21, 2016
Novak Djokovic's comments come on the heels of those from Indian Wells CEO Raymond Moore, who said women "ride on the coattails of the men" in tennis.
SHOW TRANSCRIPT

Top-ranked male tennis star Novak Djokovic is adding his name into the ring of people with opinions on gender-equality in tennis.

Over the weekend, Raymond Moore, the CEO of Indian Wells Tennis Garden, caught flak for his comments on women in tennis.

"They ride on the coattails of the men. They don't make any decision, they are lucky. ... If I was a lady player, I would go down every night on my knees and thank God that Roger Federer and Rafael Nadal was born," Moore said.

The comments, not surprisingly, didn't sit well with some, including many in the Women's Tennis Association. Moore has since apologized for his "extremely poor taste and erroneous" comments.

But Djokovic, at least in part, is backing Moore's statements.

While he said he disagreed with the words Moore used, he said the men's association "should fight for more" because "we have much more spectators."

In tennis, both men and women get equal prize money payouts — a different philosophy than other leagues around the world where women tend to get paid less.

This video includes images from Getty Images and a clip from HEAD Tennis.