Not Smoking Could Save You Up To $2M In A Lifetime 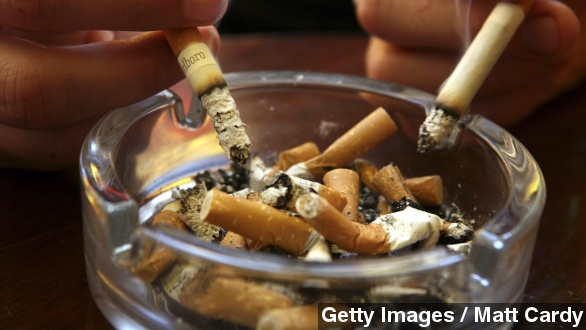 SMS
Not Smoking Could Save You Up To $2M In A Lifetime
By Matt Moreno
By Matt Moreno
January 22, 2015
A WalletHub report says on a state-by-state average, Americans can save $1.4 million by not smoking.
SHOW TRANSCRIPT

Here's yet another reason to kick the habit. If you stop smoking, you could be a millionaire — well, over the course of your lifetime at least. That's because smoking can cost Americans up to $2 million in a lifetime.

WalletHub published the findings and calculated tobacco cost, health care cost, income loss and other costs per smoker to get the final numbers.

South Carolina rang in with the lowest cost at just under $1.1 million while Alaska recorded the highest at more than $2.0 million. The state-by-state average sat around $1.4 million.

Money writes, "For a little perspective, federal data estimates that the cost of raising a child to age 18 is about $250,000 — a big chunk of change, but only a small fraction of expenses reportedly incurred by smokers."

WalletHub says the biggest bucks went to tobacco costs, accounting on average for about three-fourths of the total costs.

The American Lung Association says the average cost for a pack of cigarettes in the U.S. is about $5.51, meaning a pack a day on average would cost about $2,000 a year. Multiply that by 51 years — the smokers' lifespan after the age of 18 figure used by WalletHub — and you get about $102,000.

The outlet also factored into tobacco costs "the amount of return a person would have earned by instead investing that money in the stock market over the same period."

Medical Daily says some may be skeptical of the number, but "even if the analysis numbers seem inflated, the point of the matter is that smoking can be exceedingly expensive. ... The instant gratification of a puff of smoke can lead to a lifetime burden of financial and health problems."

According to 2012 numbers from the U.S. Centers for Disease Control and Prevention, 42.1 million Americans smoke, and cigarettes alone cause more than 480,000 deaths per year in the U.S.