Not Everyone's On Board With The NRA's Donald Trump Endorsement 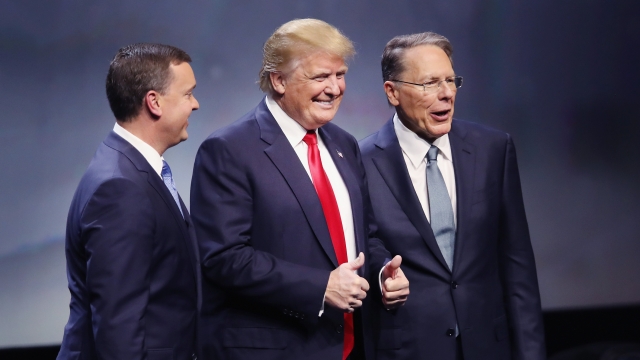 But Politico says not everyone in the NRA is sold on the presumptive GOP nominee. On Saturday, several members questioned the NRA's board over the endorsement, and at least one says he's ending his membership over it.

But other members told the outlet that between Hillary Clinton and Trump — Trump is the obvious choice.

The NRA has been vocal in the past about Clinton's pro-stance toward increased background checks for potential gun buyers.

"Clinton has made yet another false statement about guns," NRA's Jennifer Zahrn said.

Shortly after Trump's hit, Clinton responded by saying that unlike Trump, she would "not pander to the gun lobby."

The candidate who's so far been silent amid this back and forth is Bernie Sanders, whose gun stance actually falls along more conservative lines — somewhere between Clinton's and Trump's.

In fact, Clinton's hit at Sanders before for voting against the Brady Bill, which would've mandated federal background checks for all gun purchases.

We should note that while the NRA is typically viewed as conservative, the organization has endorsed Democrats before. One board member told Politico, "You’ve got to endorse someone that you think will look after your interests."

This video includes clips from NRA, MSNBC, CNN and images from Getty Images.