Not A Love Story: Taylor Swift Pulls '1989' From Apple Music 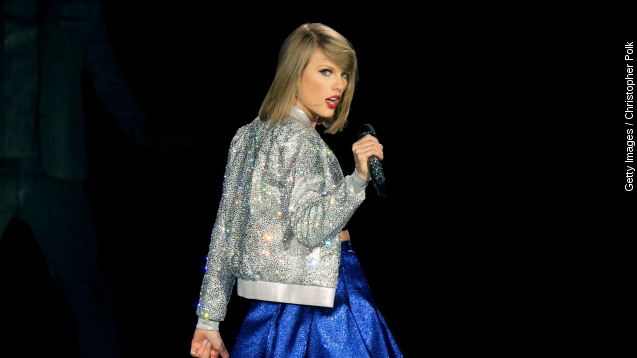 Taylor Swift has set her anti-streaming sights on Apple Music.

Well, not anti-streaming exactly. In the open letter she wrote to the company Sunday, Swift makes sure to point out she supports Apple's goal of paid streaming.

But she doesn't support the fact that Apple isn't paying musicians for the service's free three-month trial, which she calls "shocking" and "disappointing." (Video via Apple)

Apple Music launches June 30, and offers that free trial when users sign up, but it isn't compensating the artists behind the music for plays during that period.

And that's gonna cost Apple. Specifically, it means Swift's album "1989" won't be available to stream. That means no "Blank Space," no "Style" and no "Shake it Off."

Swift has presented herself as a voice for lesser known artists who she says aren't sufficiently compensated by streaming services like Spotify, which she's spoken out against in the past. (Video via Spotify)

She even took to the opinion pages of The Wall Street Journal, and lumped streaming in with piracy and file sharing as factors that have drastically shrunk album sales.

"My hope for the future, not just in the music industry, but in every young girl I meet ... is that they all realize their worth and ask for it," Swift wrote.

Still, it's not clear how strongly Swift's decision will resonate with Apple or the industry at large. She only specifically mentioned "1989," leaving the door open for her other albums to play on Apple Music. (Video via ABC)